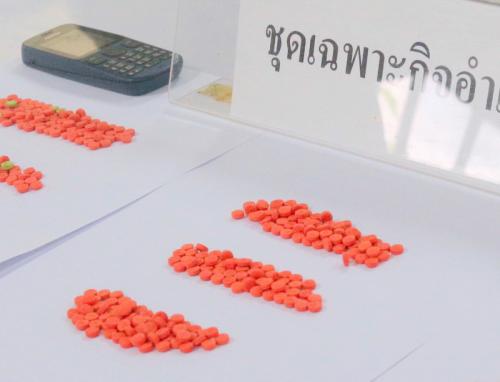 PHUKET: Thalang District officers yesterday used Phuket Provincial Prison as a venue to lure a suspected drug dealer into making a ya bah (methamphetamine) delivery during which he was arrested.

Undercover officers placed Atthachai Sittabut, 36, under arrest during a sting operation in front of the prison in Phuket Town at 2:30pm.

“The officer called Mr Atthachai and told him to meet in front of Phuket Prison in town. The officer pretended that he was going to visit a relative who was serving a sentence at the prison,” he added.

“The officer talked to him until Mr Atthichai revealed that he kept ya bah in his house in Mai Khao,” Mr Supoj explained.

Mr Atthachai was taken to Thalang District Office for questioning.

“He confessed that he sold ya bah to Mai Khao residents and people living in the area… We also found he was arrested for possession of and selling drugs in August last year. He posted bail and was still waiting for his case to be heard in court,” Mr Supoj said.

Mr Atthachai was charged with possession of a Category 1 narcotic with intent to sell, he added.