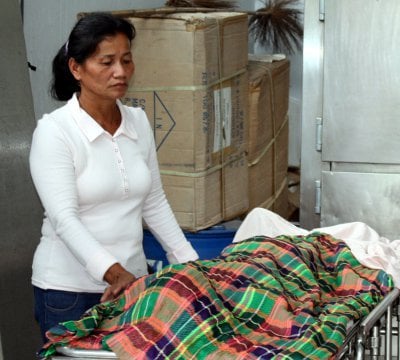 PHUKET: Phuket Prison officials are investigating the death of a male inmate following a grieving widow alleging that her husband was beaten to death.

Prison guards found Pranom Duksukkaew, 48, dead from what they believed to be natural causes when they went to rouse the inmates at 6am on Tuesday. Pranom was serving a 16-year sentence for raping a minor, Phuket Provincial Prison Chief Rapin Nichanon told the Phuket Gazette.

Speaking to the press at Vachira Phuket Hospital morgue later that day, Mr Pranom’s wife, Saiyuth Rakkarndee, 51, said she discovered her husband was dead only after she arrived at the prison to visit him.

“I arrived at the prison at about 8am, but I was told that Pranom had been found dead at around 6am and that his body had been brought here to Vachira Hospital,” Mrs Saiyuth said.

“After I saw his body, I do not believe that he ‘just died’. There were bruises all over his body; on his legs, arms and chest. It looks as if he was beaten,” she said.

“I do not believe that he just died in his sleep, as I was told by the prison officers,” she added.

Ms Saiyuth said that, after being incarcerated at the prison, her husband had difficulty communicating and had once complained of chest pains.

“During visits by myself and our relatives, Pranom could not speak properly and could not remember anybody. All he could tell me was that he had chest pains,” she said.

“I talked to our officers. They swear that the man died naturally. There was no assault involved in the death,” he said.

“When he arrived at the prison on December 3, he was already weak and suffering from alcoholism,” Chief Rapin explained.

“We had nurses assigned to monitor his condition as he was not eating properly,” he added.

“However, to ensure fairness, I have set up a committee to investigate the incident and to find out the truth,” Mr Rapin said.