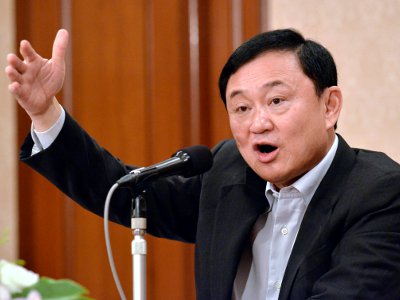 PHUKET: A clear majority of Phuket Gazette online pollsters believe former Prime Minister Thaksin Shinawatra will return to Thailand by the end of 2012.

In the Phuket Gazette Poll that went online August 10, readers were asked: Given current political events, how long do you think it will be before fugitive former PM Thaksin Shinawatra sets foot on Thai soil?

In contrast, only 35.9% thought Mr Thaksin would return at a later date – or never.

Developments that occurred after the poll was launched, such as Mr Thaksin being granted a “special visa” to visit Japan, had little effect on the voting trend over time.

In a breakdown by demographic, those identifying themselves as “local foreign residents” were most likely to think Mr Thaksin’s return would come before the end of 2011 or 2012 (71% combined).

Those identifying themselves as Thai were more than three times (37%) as likely to think Mr Thaksin would never return to Thailand than local foreign residents (12%).

Mr Thaksin’s fugitive status is based on his fleeing the country after failing to appear after being issued arrest warrants by the Supreme Court’s Criminal Division for Holders of Political Positions on a variety of corruption charges in 2008.

He was subsequently tried in absentia, found guilty of abusing his power to help his wife acquire public land at auction, and sentenced to two years imprisonment.

Phuket Prison to crack down on phone and drug deliveries