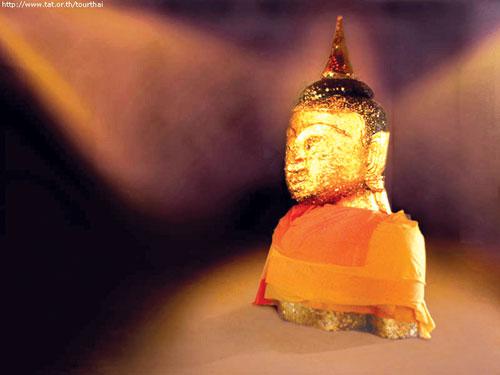 PHUKET: Wat Phra Thong, or the “Temple of the Golden Buddha”, at first glance may seem like any other temple in Phuket. This old temple, located in Thalang district in the northern part of the island, was built during the 18th century towards the end of the Ayutthaya period. Walking into the main chapel, visitors will be greeted with a peculiar sight that begs for a story.

A large golden Buddha image is set in the middle of the chapel, but only the upper half of it is visible. The rest of the Buddha image is actually buried deep underground. Wat Phra Thong, which is sometimes called Wat Phra Phood or “Temple of the Emerging Buddha”, has a fascinating history which is shrouded in legend.

According to local stories, the Emerging Buddha was first discovered many years ago in a field used for raising cattle and livestock. That morning, a severe storm broke out and heavy rain caused the field to flood, destroying rice crops that the villagers had been growing, and felling several trees in the area. When the rains finally stopped, a young boy who was the son of a local farmer led his buffalo into the wet field for the animal to graze.

When he reached the field, the farmer’s son tried to find a tree branch or a post to tie the buffalo to, but because the storm had broken most of the low hanging branches that he previously used, the boy had to look elsewhere for a sturdy post. His eyes soon fell upon what looked like a huge tree stump in the middle of the field, covered with wet mud. Thinking he had found the ideal post, the boy tied his buffalo to the stump and left it there to graze.

The story says that when the boy reached home however, he suddenly had a strange seizure that caused his body to fall to the ground. Later that morning, the farmer’s son died. The farmer, horrified by the sudden death of his son was grief stricken. He gave his son a proper burial and after that, he set out to look for the buffalo that had been left in the field. When he reached the site where the buffalo had been tied, he was stunned to find the buffalo lying on its side, dead, still tied to the strange stump. Fearful of the strange object, the farmer cut loose the rope and with the help of a few other villagers, took the dead buffalo away from the site to be buried elsewhere.

That night the farmer had a dream. In his dream, a being came up to him and explained that the reason why his son and the buffalo had died was because his son had tied the beast to the “Ketu Mala”, or the topmost part of a sacred Buddha image. The farmer woke up startled. The next morning, he asked a few villagers to go back with him to the field where the buffalo had been found dead. They found the mud-covered stump and began washing it with water and scrubbing away the mud. Soon the topmost part of the golden Buddha began to emerge and shine in the sun. The farmer had discovered a golden Buddha image, much of which was buried deep underground.

News of the discovery travelled rapidly and people began to flock to the statue to offer their prayers and seek the Buddha’s blessings. Soon the Governor of Thalang himself came to know of the recently discovered Buddha image and it unsettled him to know that the sacred image had been buried under mud and dirt for years. He therefore ordered the villagers of Thalang to dig the statue out of the ground and take it to a more suitable place. The villagers tried to dig the Buddha image out of the ground. As they dug deeper, it is said that swarms of locusts and wasps started emerging from the disturbed ground that had been dug around the image. They wreaked havoc by stinging anyone who was digging around the Buddha, but spared the worshipers that were also there, only mere footsteps away offering their prayers.

Many diggers were hurt badly by wasp stings and some later died. When witnesses reported the occurrence to the Governor of Thalang, he ordered them to suspend any digging around the Buddha image. Instead the Governor of Thalang ordered the building of a shelter around the exposed top of the golden Buddha image. A roof was built to shield the image against sun and rain.

Many years later, a travelling monk came to Thalang and saw the buried golden Buddha. The monk was afraid that the golden tip of the image, the only part of the Buddha that emerged from the ground, could be cut off and stolen. He therefore encouraged the villagers to encase the exposed part of the golden Buddha with cement made from seashells and sand, concealing it from view. In my next column, we will find out more about the legend of the golden Buddha and how the temple of the emerging Buddha was built.

Phuket Diving: Plunging in before big splash in Bollywood