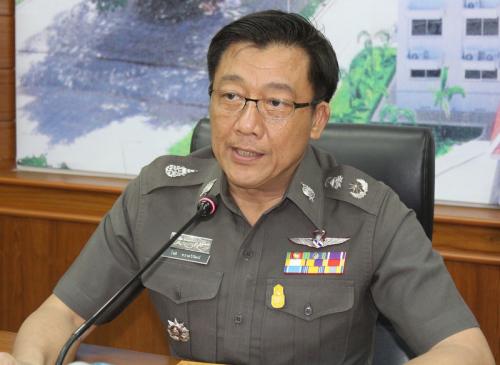 PHUKET: Phuket Police on the hunt for the killers of Jintana Mahattanapak now have a description of the gunman and his driver accomplice, as well as the motorbike the killers were riding.

Contrary to earlier reports, in which police announced they were searching for a black Mitsubishi Triton pickup truck and a white sedan (story here), Phuket Provincial Police Commander Choti Chavalviwat today said that officers were now searching for two men seen following Mrs Jintana on a motorbike after she left work Friday night.

Mrs Jintana, the human resources director at the Hilton Arcadia Phuket Resort & Spa in Karon, was executed by a single gunshot to the head while waiting at traffic lights near Chalong (story here).

“We now have a lot more information about the killers. Police have checked footage from more CCTV cameras – 11 cameras in total – and we have questioned many witnesses who were near the intersection at the time of the shooting.

“We now believe the gunman was a passenger on a motorcycle following Mrs Jintana home from work,” Maj Gen Choti said.

“The suspects followed her when she left the hotel at about 7:45pm right up until the time of the murder at around 8:10pm. Witnesses, drivers on the road and people at the scene, gave us information about the shooting and a description of the killer,” he added.

“However, we cannot reveal the description of the killer until we have enough evidence for the courts to issue arrest warrants,” Gen Choti said.

Mrs Jintana was killed by a close-range shotgun blast through the driver’s side window, Gen Choti added, noting that police had collected a shotgun cartridge at the scene.

“We have yet to identify the motive for murder…We questioned more than 10 of her co-workers and her husband, and we have now ruled out ‘family conflict’ as a possible motive,” he said.

Gen Choti pointed out that police were still investigating the possibility that Mrs Jintana was murdered over a conflict at work.

“Mrs Jintana was very strict in her work and [since joining the Hilton six months ago] she had fired several people, including one particular employee who was in a senior position.

“However, we have yet to rule out the possibility that she may have been killed because of a conflict with people not related to her work,” he added.

Gen Choti said he has ordered his officers to provide him with daily case updates.