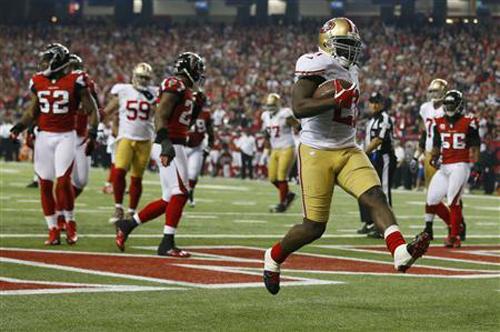 Brilliant brothers set up unique Super Bowl showdown
Reuters / Phuket Gazette
PHUKET: The San Francisco 49ers and the Baltimore Ravens won their National Football League championships in stunning fashion to set up an extraordinary sibling rivalry in next month’s 47th Super Bowl.
The 49ers, coached by Jim Harbaugh, overturned a 17 point deficit to beat the Atlanta falcons 28-24 in the NFC decider before the Ravens, under the guidance of Jim’s older brother John, stunned the highly-fancied New England Patriots 28-13 in the AFC title game.

Sibling rivalries are not uncommon in sport, most notably with the Williams sisters in tennis, but it will be the first time that head coaches from the same family square off for the greatest prize in American professional sports.

“I don’t know if we had a dream this big,” John Harbaugh told reporters.

With a bit more luck, the pair might have met in the Super Bowl last year but both came up short with the 49ers losing the NFC championship in overtime to the New York Giants and the Ravens losing by three points to the Patriots in the AFC.

This time, both teams ended up on the winning end of the scoreboard to book their places at the Superdome in New Orleans on February 3.

The 49ers, one of American Football’s most successful franchises, will be making their first appearance in the Super Bowl for 18 years.

They have never lost an NFL title game and if they maintain their perfect record they will tie the Pittsburgh Steelers’ record of six titles.

Their chances of just getting to the Super Bowl looked doomed after they fell 17-0 down in the early second quarter, a deficit no team had ever overcome in the NFC championship game.

With second year quarterback Colin Kaepernick calling the shots, they rallied back with two touchdowns, briefly cutting the margin to three points before Atlanta quarterback Matt Ryan connected with retiring tight end Tony Gonzalez to give the Falcons a 10-point advantage at halftime.

But the Falcons failed to score a single point in the second half while San Francisco running back Frank Gore scored two unanswered touchdowns to secure his team’s victory.

“We are tough, it is hard to break us. We aren’t going to give up,” Gore said. “We will keep fighting into the fourth quarter and until the game (clock) hits double zero.”