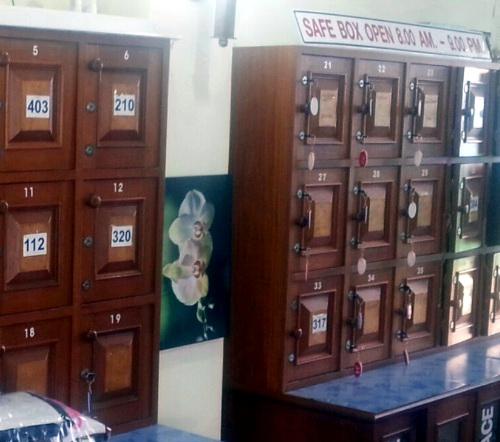 PHUKET: Phuket Police are on the lookout for three men, all thought to be from the Middle East, who are suspected of doping a front desk officer at a resort near Karon Beach and robbing the resort’s guest safe boxes of about 3 million baht in valuables.

The front desk officer at Karon Place Hotel who was allegedly drugged by the gang told the Phuket Gazette that the three foreigners had visited him sometime after midnight on the two nights preceding the robbery.

“Very late on Friday and Saturday night, the foreigners came and chatted, like they were trying to make friends with me. Each night they brought me a couple of beers and some somtam [spicy Thai salad].

“But on the night of the robbery, they brought me hot coffee – that’s the last thing I remember,” he said.

The front desk officer described the men as about 180cm tall, with fair skin. Elaborating, he said they looked like they were from an “Arab country”.

The robbery has attracted the attention of the Phuket Provincial Police, with deputy commanders Col Arun Kleawwatee and Col Witoon Kongsudjai leading the investigation meeting at Karon Police Station yesterday.

“About 21 tourists had their belongings stolen from the locker-style ‘safe boxes’. Most of the items stolen were passports, cash and mobile phones,” Col Arun said.

The robbers also made off with some of the hotel’s CCTV equipment and recordings.

“Karon Police officers have questioned the hotel guests who had their belongings stolen, but some of the them are Russians who do not speak English, so we have yet to compile a complete list of all the items stolen,” Col Arun said.

“Police are searching for the suspects to bring them to justice,” he added.