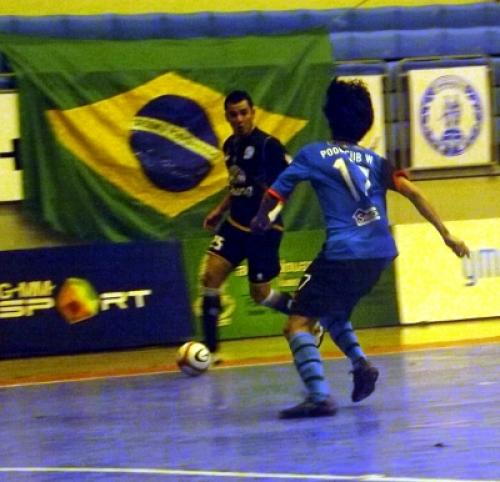 Played in front of an energetic crowd of about 1,000 fans at Phuket’s 4,000-seat Indoor Sport Complex in Saphan Hin, the match was Phuket’s seventh home match of the season and 15th of 30 overall.

Before the game, Phuket head coach Suphol Senapeng told the Gazette that the match would be important as it would decide if the team would achieve its first half season aim of finishing as one of the top five teams in the 16-team league.

Prior to the match, Phuket were sitting in 7th place, while their opponents in 5th.

The goal of winning the match and thus swapping rankings with Si Saket would not be easy, and coach Suphol was adamant that his side would have to stop Si Saket’s top scorer, Romualdo Namorato, who also leads the league with a total of 23 goals.

And while Phuket were effective in stopping Romualdo in this match, it would prove to be another Brazilian opponent who was the menace for Phuket.

Phuket’s Brazilian leading scorer, Jackson Santos put Phuket on the board shortly after that.

Play shifted back and forth with intense pace, but the visitors would extend their advantage with Si Saket’s Pakorn Samipak scoring in the final minute of the first half to put his side up 3-1.

With lighting speed, Phuket’s Benjarong Panphob answered on the other side of the pitch to bring the score 3-2 going into half time.

A serious half time talk from coach Suphol seemed to be effective as Phuket took control of the game in the second half, enjoying many close shots on goal.

Topping off many missed opportunities, Phuket’s latest Brazilian signing Marcos Vinicius finally found the equalizer half way through the half, bringing the crowd to their feet with a 3-3 score line.

Si Saket pressed Phuket’s goal but were unable to find the rhythm that they enjoyed in the first half.

The Andaman Pearl continued to please their fans, many of whom also sported Phuket FC green.

In the 32nd minute, Phuket’s Santos, making the most of a counter attack, perfectly timed his strike to beat his marker just outside of the area.

The shot pierced the top of the net just under the cross bar and the crowd went ecstatic, celebrating Santos’ 15th goal for the team.

Santos is now the fifth best scorer in the league.

With the clock winding down, Sisaket adapted a power play formation, bringing their head coach / goalkeeper Setthakornchai Chuenta out of the nets in a final attempt to equalize.

However, the Andaman Pearl’s defense was solid, and they held on to win 4-3.

After the game, Sisaket’s coach and keeper, Setthakornchai Chuenta told the Gazette that he had enjoyed the game, and did not feel so much pressure [in needing to win].

The victory ensures that Phuket move back into 5th place and thus achieve their goal.

Other results from the GMM Thailand Futsal League 2012-2013 last night are as follows:

Phuket United’s next match is in the Thailand Futsal FA Cup on Saturday, January 19, against ATP FC.

The match will be played at Bangkok’s Fashion Island futsal arena with a 12pm kickoff.