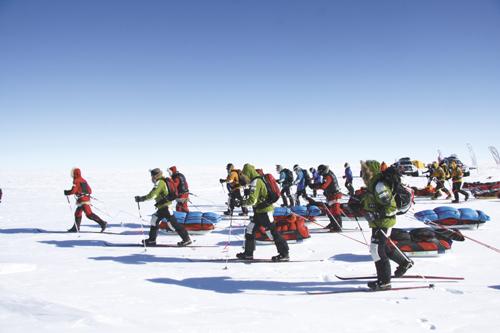 PHUKET: NO SMELL, no life, no sound – except the booming of ice cracking and the wind – the South Pole is one of the most hostile environments in the world, but even here in this frozen abyss dreams manage to materialize.

Few search for answers in so bleak a landscape, a place where one meter of snow is no different than another 700 kilometers away. Yet, half a world away, perched on a bar stool in a button down shirt at the Sunset Bar on Soi Bangla is a man who spends half of the year in such a desolate landscape helping people from all walks of life fulfill their goal of participating in the world’s most extreme multi-discipline endurance races. The other half of the year he’s on the island, helping manage the throbbing, wild crowds that fill his wife’s bar in Phuket’s party district of Patong.

David Martin, one of the founders of Extreme World Races (EWR), having formerly served as a warrant officer with the Royal Logistics Corps in both the Arctic regions and in the jungles of Central America, is no stranger to extremes.

The most recent high-profile race established by David and his team is their annual South Pole race in honor of those explorers who first raced to the South Pole in 1911. The EWR’s “Scott vs Amundsen Centenary 2011 Race to the Pole” ran 745km through the high altitude, white washed desert of the southern Polar Plateau to the
Geographic South Pole.

Every year people around the world sign up to fight the elements and endure the mentally grueling battle to achieve this extraordinary goal. These individuals burn over 8,000 calories a day and desperately try to pack back on the necessary 6,000 to 7,000 calories a day to prevent the loss of essential body mass needed to ski across the frozen wasteland dragging all their necessary gear behind them.

“The physical element of the race is not a massive problem,” David surprisingly explains. “Physically, most people have the ability to do it.”

But the vast majority of individuals stuck in one of life’s ruts are never able to break free of the set track and escape their nine to five, escape a life that they are no longer satisfied with.

At the Sunset Bar, David hears these stories from middle aged men spending their two-week holidays complaining about a life that they are unable to untie the apron strings from.

David isn’t suggesting that everyone in the world should start purchasing crampons, cross country skis and arctic coats.

Recognizing achievable goals and gearing expectations to hit those is part of the EWR program, but David steps in from the cold to a New York City example of an extraordinary achievement.

“Imagine a housewife who has never left the UK, who goes to New York City on a shopping spree to buy the same pair of shoes that Sarah Jessica Parker was wearing in an episode of Sex and the City – for her that is incredible. All of this is relative,” he says.

Those that are running from something, fighting boredom or are professional extreme racers come to EWR from diverse backgrounds. When provided with the support structure – logistically, physically and mentally – these individuals are able to take themselves beyond the limits of what they believed could be achieved.

EWR has, for over twenty years, striven to break the mold. There are no boundaries to the experiences that a person can achieve. Physical handicaps, like many other factors are not excuses explains David, who has already seen a paraplegic compete in one of the South Pole races, as well as a partially blind man.

“I’ve always struggled with the distinction between able-bodied and disabled people because, at the end of the day, there are some very powerful individuals out there, despite them having a disability. These individuals are very intelligent in some cases, and extreme racers in some other cases,” he says.

Years ago David ran mixed ability weekends that brought unique and “expanding” experiences to kids with cerebral palsy, down syndrome and other disabilities.

“We had a guy named Ruben with [congenital] rubella [syndrome]. When his caregiver called to say they had a little bit of a challenge, I was naive at the time, and asked what the symptoms were,” explains David.

The symptoms can include: deafness, blindness, growth defects, as well as a host of other physical and mental issues.

“So we put Ruben in a speed boat and the feeling of bouncing up and down in the boat was fantastic for him. The motion was the same as an able bodied person gets sitting on a jet-ski. Then we put him in a wetsuit and life jacket and threw him into the water and drove around him creating waves. We couldn’t get him out – he loved it”.

Not only did Ruben throw a fit when they tried to take him out of the water, he also refused to leave the hot tub where he had a chance to feel the bubbling warm water.

Everyone has a weakness. By establishing those individual handicaps during the EWR training program in Norway, David and his team are able to push competitors in the right direction to help ensure that they can surmount these individual obstacles in order to succeed. This is also the time when he is able to accurately assess why they are participating in one of the harshest races in the world.

“We establish what they are actually there for, and in doing so we can build upon those reasons and motivate them towards achieving those personal goals.

“For example if we have a middle-aged, divorced housewife with a couple of kids that have just left home, who now has a new lease on life and wants to go out there to do something for herself, that’s fantastic.

“She’s not going to go out there and win the race against some of the extreme athletes we’ve got. But we can preposition goals for her, so that, at the end, she can still feel good about achieving the goals she set out to achieve,” he explains.

In 2011, a self-employed electrician in London was sitting on his sofa munching on chips with a six-pack of beer watching BBC’s On Thin Ice, which documents one of EWR’s South Pole races, and said to himself, “I can do that.”

“He signed up and came to the training. In fairness he did it. He bought the kit, he jogged around his local park – he did it. Was this guy a fine specimen of an athlete? No,” says David. “However, he was an individual who poured his heart and soul into achieving something he wanted and was given the support to do it.”

The man, who had never even played football as schoolboy, had signed up for the 379 mile ultra marathon (on EWR’s ‘Black Ice Race’ in Irkutsk Siberia on Lake Baikal). He made it to the halfway point of the race, and in doing so inspired himself to come back next year and complete the entire race, David explains.

“These are the people we really care about,” he adds.

No one from Phuket has yet to step away from their tropical beachfront paradise to race with EWR, David confirms with a laugh.

“I actually joke with my wife that my three boys will be the first Thai nationals to race to the South Pole – they just don’t know it yet. I’ll groom them over time, they are interested in penguins at the moment, so they are kind of getting into it,” David confesses.

But really it is not about leaving Phuket for the desolate frozen world of the Southern Polar Plateau; it’s about stepping away from the computer, the television – putting down your iphone5.

It’s about signing up for the next Laguna triathlon or the next 5k charity event.