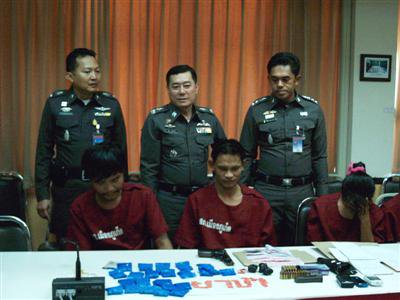 PHUKET: Phuket City Police have arrested a boyfriend-girlfriend team of major drug suppliers, seizing over 6,000 ya bah (methamphetamine) pills in the process.

Also arrested in the operation were several dealers working for the couple and some of their customers.

The busts were announced at a press conference at Phuket City Police Station yesterday morning.

The busts started with the arrest on Tuesday of Chaisak ‘Tik’ Jaiman, who was caught in possession of 600 ya bah pills and forced to inform on his supplier, Mr Wisan.

A search of Mr Wisan’s room in the Baan Suan Place apartment block on Soi Bangyai, behind Big C in Wichit, uncovered the largest ya bah haul in Phuket in some time: 5,800 pills, along with a 9mm pistol, 58 rounds of ammunition, a customers list and an account document.

Also arrested in the room was 35-year-old Kanchanaburi resident Jiraporn Klincharoen, described by police as the live-in girlfriend of Mr Wisan.

Subsequent investigations ended in the arrest of five of Mr Wisan’s sub-agents and customers.

The first was identified as 22-year-old Supphachai ‘Boy’ Phetthong from Trang, who was caught with 170 pills in his room at the Sodsri Apartments on Soi Susanti, off Mae Luan Road in Phuket Town.

He was charged with possession with intent to sell.

Four others were arrested for possession of three or fewer pills in rooms inside the same apartment block.

Ms Duangduen Hom-ob, a 24-year-old from Chanthaburi, was caught with seven pills in room 119 of the Nopphadol apartments in Phuket Town. She was also charged with possession.

Mr Wisan confessed to buying 5,800 pills from another big dealer in Phetchaburi at a price of 270 baht per pill, then selling them in Phuket at 300 baht each.

The profit margin, if accurate, may reflect that drug dealing is quite a competitive business on the island.

The pills were smuggled into Phuket passing through the Tha Chat Chai Police Checkpoint by a messenger aboard a bus from Phetchaburi.

“Ya bah smugglers always bring it to Phuket by bus, packing it into their luggage because they know it is too time consuming to thoroughly check every passenger’s bag. That’s why we have to rely on tip-offs by informants,” Maj Gen Pekad said.

Asked about the Alpha 6 substance detectors that are still in use by some drug units in Phuket, he said, “They are useful, but it takes quite a long time to find the drugs because the police who use the units must hold them very still.”

The Alpha 6 units use the same “molecular resonance” technology as the now-discredited GT200 bomb-detection devices.

The Science and Technology Ministry in February said it was set to test the effectiveness of the Alpha 6 units, but no results have been reported thus far.

However, Maj Gen Pekad said he thought the future of drug detection on the island may rest on four legs, not dowsing rods.

“Searches using drug-sniffing dogs might prove more useful. The puppies ‘Nin’ and ‘Chao Kuay’ should be ready for active duty by the start of next year,” he said.

He was speaking in reference to two mongrel puppies owned by Muang District Chief Supachai Pochanukul. They are being trained in drug detection at the Phuket International Dog School on Koh Sireh.

Something’s getting fishy in Phuket