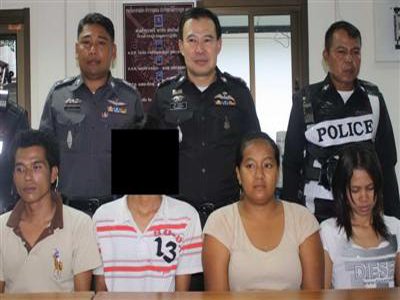 PHUKET: Faced with high-tech detection technology and sniffer dogs, drug smugglers are resorting to stashing methamphetamine pills inside containers of fermented fish (pla raa) in an effort to hide their smell from authorities, Phuket Police say.

Chalong Police held a press conference yesterday afternoon to announce the arrest of four suspects for possession of methamphetamine pills, known in Thailand as ya bah, or ‘crazy drug’.

The fourth suspect was a 17-year-old who cannot be named.

Police with a search warrant arrested all four in a home on Soi Songkhun in Chalong at 11am yesterday.

Col Wichit said the arrest followed issuance of a warrant the day before following reports that the people in the home were smoking ya bah on a regular basis.

Only a few pills of the powerful stimulant were seized during the raid, however.

When confessing to the charges the suspects said they sourced the drugs from an Isarn man named “Mr Ek” at a cost of 300 baht per pill.

Col Wichit said the suspects told him the pills arrived from Isarn stashed inside containers of pla raa, a fish paste so powerful in flavor and aroma that the very mention of its name evokes a visceral reaction in many Thais.

Sniffer dogs, normally efficient at finding the pills, slink away in fear after one whiff of the substance, which also masks the drugs from detection by the controversial Alpha 6 devices.

Many recently-arrested drug dealers have told police the drug was being transported this way, Col Wichit said.

Col Wichit ordered his officers to keep a sharp eye on the lookout for suspicious-looking shipments of pla raa and to rid Chalong of illegal narcotics in general.