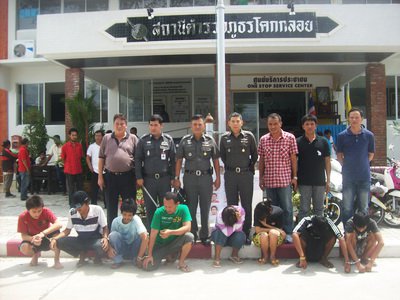 PHUKET: The target of the bomb attack in Phuket late last night was wanted by police in Phang Nga, who named him as a drug kingpin whose gang was rounded up in Khok Kloy Police District in October last year.

The bomb attack was the top topic of conversation at the previously-scheduled monthly security meeting chaired by Phuket Vice Governor Sommai Prijasilpa at Provincial Hall this morning.

Mr Mongkol was injured by one of the two Improvised Explosive Devices, better known as IEDs, and is now in hiding, Lt Col Supawat said.

A report issued by the Phang Nga Provincial Public Relations Office last October stated that Mr Mongkol was the head of a drug gang operating in both Phuket and across the bridge in Khok Kloy subdistrict, Phang Nga.

Seven other of the gang members were arrested and charged, with 525 grams of ya ice (crystal methamphetamine) and 709 ya bah (methamphetamine) pills seized, but Mr Mongkol escaped.

A warrant issued for his arrest listed Mr Mongkol as a resident of Koh Kaew Village 3 in Muang District.

Despite his fugitive status, Mr Mongkol continued to periodically visit his home in the Bo Din housing estate, where the attack occurred just after midnight early this morning.

Four vehicles were damaged and the neighbor’s poodle was killed in the attack, the committee heard.

Both bombs were homemade devices, one with a PVC housing and the other constructed using an instant noodle soup container, Lt Col Supawat said.

Thalang Police are expediting the investigation and hope to track down Mr Mongkol soon, he said.

Vice Governor Sommai urged police to work with their counterparts to find Mr Mongkol as quickly as possible.

Incidents like these damage Phuket’s image as a tourism destination, she said.