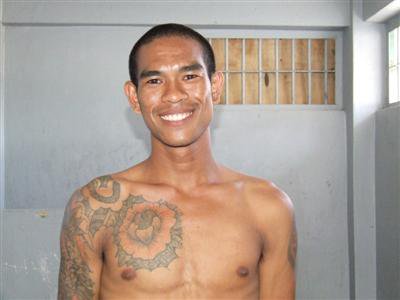 PHUKET: Chalong Police last night arrested two suspects for the armed robbery of a currency exchange booth in Phuket in late November, which has now been revealed as an “inside job”.

The first suspect, 25-year-old Kriangsak ‘Jae’ Jintaphakul, was arrested at his home at the Chao Fa Village residential estate on Chao Fa East Road in Wichit at about 9:30pm on January 21.

A warrant for his arrest, dated January 13, was issued following the release of a composite sketch of his face, police said.

Seized as evidence from a black waist pouch found in a cabinet on the second floor of his home were a large number of travelers’ checks and banknotes of various currencies, including US, Australian, Singapore and Hong Kong dollars, Pounds Sterling and Swiss francs.

Also seized were a motorbike and two .38 caliber weapons, including a loaded one kept in a closet at the head of his bed.

A search of Mr Kriangsak’s body uncovered a gram of ya ice (crystal methamphetamine) in a small plastic bag in his pant pockets.

Also presented as evidence by police were travelers’ cheques recovered from the Siam Commercial Bank branch at the Tesco Lotus shopping mall on the bypass road in Rassada.

Under questioning, Mr Kriangsak confessed he conspired with Siam Commercial Bank employee Amnard “Tor” Ponpramun, 21, to carry out the heist.

Mr Amnard was one of two employees at the kiosk when a knife-wielding intruder [Mr Kriangsak] “forced” his way in, bound and gagged the employees, and made off with almost 2 million baht.

After hours of police interrogation following his arrest at his Rassada home, Mr Amnard at about 4am confessed that he and Mr Kriangsak were friends who had planned the whole thing together.

Both men have been charged with conspiracy to commit armed robbery at night.

Despite the seriousness of the charges against him, the lean and tattooed Mr Kriangsak was smiling from ear to ear when photographed by police in a holding cell at Chalong Police Station.

Both men will remain at Chalong Police Station until tomorrow, when they will appear at Phuket Provincial Court.