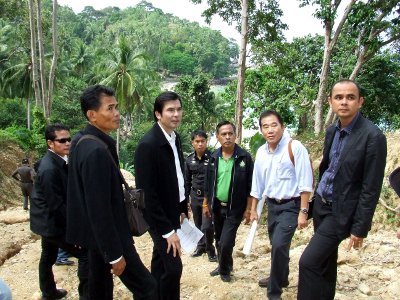 PHUKET: A security guard questioned by government officials about the ownership of land at Freedom Beach in Patong has died of what appears to be a suicide, a local Phuket newspaper has reported.

A report in today’s edition of Siangtai Daily newspaper identified the deceased as 54-year-old Narong Piromrak, a native of Nakhon Sri Thammarat province.

The death was reported at 6pm yesterday by a woman identified in the report as his wife, 45-year-old Wanida Namkhun.

Mrs Wanida told police she found her husband’s body suspended by the neck from a ceiling beam in the bathroom of their one-story cement home on Muen Ngern Rd, at the bridge to Patong Bay’s southern headland.

Patong Police and Phuket Kusoldharm Foundation rescue workers recovered the body, which was suspended by two belts fastened together. The body was taken to Patong Hospital morgue.

They estimated the time of death at about 10 hours before the discovery.

Mrs Wanida said she and her husband ran a stand selling somtam (spicy papaya salad) and bottles of gasoline from their roadside home, which is on the way to Tri Trang Beach.

But that wasn’t his only occupation, she explained. About five years ago Mr Narong was hired as a security guard at nearby Freedom Beach, just over the sub-district border in Karon.

Mr Narong looked over a plot of land that triggered a national-level probe after it was put on the market for billions of baht.

Government investigators, including Pheu Thai Party spokesman Prompong Nopparit, questioned the authenticity of the land title deeds held by the owner. They suspect they were issued illegally on state forest land with the help of corrupt government officials.

About two weeks ago, Mr Narong under duress signed a document related to his knowledge of the history of the land and was under stress ever since, the report quoted his wife saying.

Mrs Wanida said her husband never suffered from stress or depression before and thought it was unlikely he would have taken his own life, according to the report.

Phuket ATM scams: Even professionals get caught out