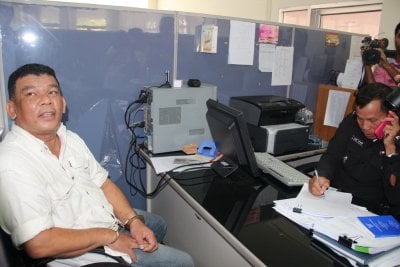 PHUKET: Police on Monday arrested a man for impersonating a police officer after he was caught in a sting operation soliciting 8,500 baht from a “victim” who was asked to pay for a dinner hosted by Phuket police chief Choti Chavaviwat.

Chaowaroj Jangjob, 44, was arrested near Phun Phol Plaza in Phuket Town after police received a report from a person, who remained unnamed by police, claiming that the man had called him on his phone.

Mr Chaowaroj allegedly introduced himself as Maj Gen Choti and asked the person to pay for an 8,500-baht dinner at a restaurant.

The “victim” called the police and the report quickly funneled up the chain of command, resulting in Gen Choti ordering police to meet the “victim” at the rendezvous to catch the impostor.

Mr Chaowaroj arrived at 9:30pm and met the “victim”. After chatting for several minutes, the “victim” handed over the cash – and police moved in and made the arrest.

“He said that over the years he had received about 1.5 million baht in ‘donations’, but that he spent all the money on gambling,” said Col Wanchai.

“He also promised to repay all his victims,” he added.