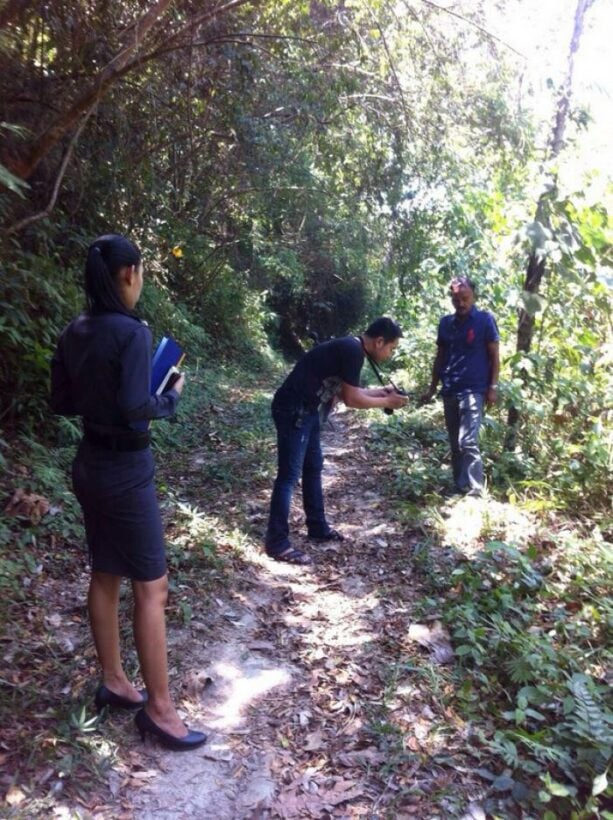 PHUKET: Police are hunting for five men who allegedly beheaded their co-worker and dropped the severed head and body in the jungle near the San Chao Phor Suea Shrine on Patong Hill on Sunday night.

The head of 21-year-old Myanmar national Wai Phyo Kyaw was found near a clump of banana trees. His decapitated body was discovered about two meters away.

“We were notified of the incident yesterday at about 2pm by Mr Kyaw’s girlfriend, 21-year-old Stwe Stwe Yu,” said Nucharee Longkaew of the Patong Police.

Patong Police officers and Kusoldharm rescue workers rushed to the scene near the shrine.

“We found Mr Kyaw’s head,” said Maj Nucharee. “Two meters away, we saw a hand sticking out of the ground, so rescue workers started to dig.”

The police then questioned Ms Yu, who told them that Mr Kyaw was talking with a group of co-workers after they had finished work that night.

“Mr Kyaw had a violent argument with five of his colleagues, and the men attacked him. Ms Yu reached out to protect Mr Kyaw from a knife and her hand was slit,” explained Maj Nucharee.

“She ran to villagers for help, and was taken to Patong Hospital to receive treatment.”

Ms Yu returned to the scene Sunday night, but could not find Mr Kyaw.

“She contacted the police yesterday morning, but officers were unable to find him,” said Maj Nucharee.

Later that day, Ms Yu went to the shrine to look for her boyfriend.

“She was shocked to find Mr Kyaw’s head hidden in the trees. She informed us immediately,” added Maj Nucharee.

Police are continuing their search for the suspects, but declined to release their names.