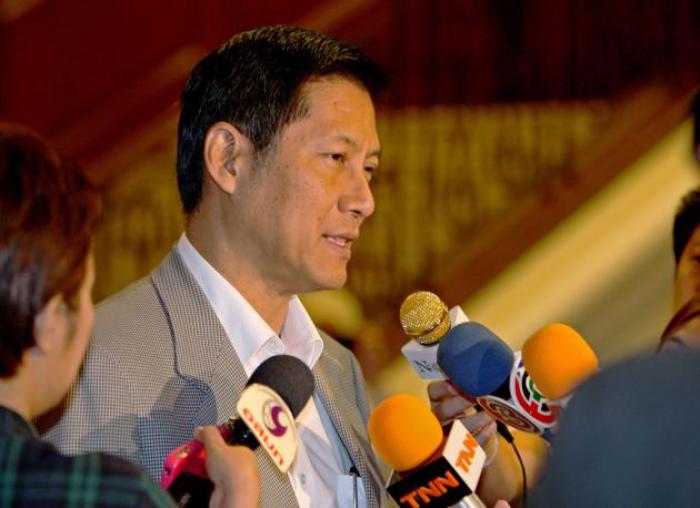 PHUKET: It is believed that the Centre for Maintaining Peace and Order (CMPO) will seek government approval to lift the state of emergency and replace it with the Internal Security Act (ISA) this week.

National Security Council chief Paradorn Pattanatabut said yesterday that the government had to conform to the Civil Court’s order as well as respond to the business sector’s call to scrap the emergency decree due to the negative impacts on the economy. He added that the authorities might impose the ISA instead.

A security source, who asked not to be named, said changing over to the to the ISA was aimed at avoiding the nine points the Civil Court had prohibited action on.

CMPO director and caretaker Labour Minister Chalerm Yoobamrung said the emergency decree did not really exist because of the restrictions the court had placed. He added that it was up to caretaker Prime Minister Yingluck Shinawatra to decide if the government should impose the ISA, adding that he expected a repeat of the 2010 riots because the government did not have full authority.

He said the Cabinet should instruct the police to look into whether the emergency decree should be lifted and if it finds grounds to keep it in place, then it should not be scrapped.

The decree is set to expire on March 22.

CMPO member Tarit Pengdith said the centre had asked the Civil Court to withdraw its prohibition and had called on the Criminal Court to deny bail permission for PDRC’s Rawee Maschamadol after he led a rally to the Energy Ministry last week.

The CMPO also petitioned the Constitutional Court yesterday, asking it to order PDRC protesters to stop rallying as they were not really peaceful.

The petition also said that the protesters were making an unconstitutional attempt to come to power. It submitted 60 boxes with 930 folders of documents as evidence. These included photographs of violent incidents and transcripts of PDRC leaders’ speeches.

However, Nipat has only agreed to spend one night – from 6pm to 6am – at the site. Surachart said the monk was also insisting that the negotiators put their lives on the line should any violence break out at the rally site. He added that he was not sure if there would be a third round of negotiation.

Phra Buddha Issara said the negotiators wanted the protesters to relocate, not just open the road to the traffic. He said talks like this could be a breach of the Civil Court’s order for an injunction against the government’s imposition of emergency decree.

PHUKET: Public sector corruption was a major problem last year, with the “Corruption Situation Index” (CSI) in December showing that 75 per cent of those polled saying it had got worse. That was up 12 percentage points from 2012. This trend needs to be rectified immediately through pressure from the whole community, social and business groups said.

Speaking at a seminar sponsored by the Thailand Development Research Institute yesterday, Deunden Nikomborirak, the TDRI’s research director for economic governance, said: “The problem of corruption has been escalating since 2010 because Thais have lost their trust in politicians, and it is the most problematic factor for doing business in Thailand.”

Sauwanee Thairungroj, president of the University of the Thai Chamber of Commerce (UTCC), which compiled the CSI, said 75 per cent of respondents believed that the current problem of corruption was worse than a year earlier, when the figure was 63 per cent.

The CSI’s sample of 2,400 people consisted 51.9 per cent of ordinary citizens, 24.4 per cent civil servants and 23.6 per cent business operators.

Civil servants and politicians are the main sources of corruption, according to poll results from the UTCC and the National Institute of Development Administration (NIDA).

The CSI found that 15.1 per cent of respondents believed that lack of enforcement and loopholes within the regulations were allowing rampant corruption in the public sector, usually in the form of “using political positions for personal benefit” (15 per cent), bribery (14.8 per cent), corrupted policy (12.2 per cent) and nepotism and cronyism (12.2 per cent).

A NIDA poll of 1,249 individuals in 2013 also found that lack of enforcement (45.88 per cent) and loopholes within the law (39.69 per cent) were the main factors worsening corruption.

Suvicha Pouaree, director of the NIDA poll, said other surveys it had conducted last year also found that the majority of people believed that government mega-projects were most prone to corruption because of the amount of money involved.

The polls showed that a majority believed that the planned Bt2-trillion infrastructure (74.78 per cent) and water-management (82.93 per cent) programmes would be prone to corruption. However, only a minority (31.3 per cent) believed that the late payments to farmers in the rice-pledging scheme were also due to graft.

Yet another survey, this one by the Thai Institute of Directors (IOD) with a sample size of 1,066 company directors, managers and chief executives, found that 75 per cent of business operators believed that corruption had been on the rise in the past two years, and 93 per cent believed that the problem was at the high to highest level. However, 38 per cent still thought the problem of corruption could still be solved.

The survey found that the communications (15 per cent), energy (14), agriculture (11), real estate (10), and construction sectors (9 per cent) were most prone to corruption.

Like the UTCC and NIDA polls, the IOD survey also found that lack of enforcement and transparency were the main factors that allow corruption to continue to exist.