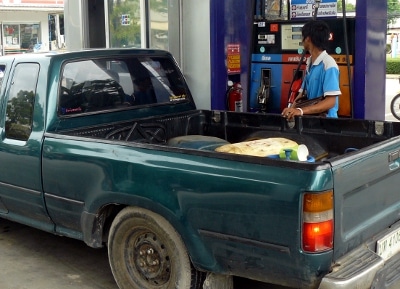 PHUKET: Operators of local gas stations are fighting to stave off a price rise at Phuket pumps following the Phuket Provincial Administration Organization (PPAO) announcement of its intention to impose a local “maintenance tax” on fuel.

The surcharge, which would raise costs for operators by no less than 3 satang per liter, was revealed to operators in a letter issued by the PPAO on Tuesday afternoon.

If implemented, the surcharge would be levied retroactively, starting October 1.

Presiding over a press conference held by operators, Mana Rattanayan, president of the Phuket Petrol Traders Club, said that the tax would force operators to raise prices.

A fuel hike would not be received well among consumers in Phuket, where fuel consumption is on the up, he said.

Prior to the press conference, Mr Mana, who is also the manager of Phuket Roumporn Co Ltd, which runs PTT gas stations in Phuket, held a meeting among 16 Phuket petrol operators.

He explained to the press none of the operators agree with the policy, saying it would place an extra burden on consumers.

“At present, we already pay a 7% gasoline tax and a 10% maintenance tax to the Excise Department. So this [additional surcharge] would be double taxation [on petrol].

“We would like the PPAO to cancel the plan in order to help alleviate people’s [cost of living] troubles,” said Mr Mana.

He explained that though the PPAO had yet to impose the new tax, it is expected to be between 0.03 to 0.05 baht, as is charged by local provincial authorities in some other provinces in Thailand.

“It depends on the consideration of the PAO in each province whether to impose such a tax or not,” he said.

“But they [the PAO] will not [impose the tax] if they have enough income collected from other sources.

“In our opinion, the PPAO has sufficient income from taxes collected from hotel businesses. Besides, we don’t even know what they propose to use the additional income [from the fuel surcharge] for.”

He continued, “We are going to compose and send an official letter to the PPAO to ask them to reconsider, as we have done in the past. Previously, they wanted to impose such a tax, but we requested that they reconsider, and they agreed.”

There are 22 petrol operators in Phuket providing fuel from Shell, PTT, ESSO, Caltex, Jusco and Bangchak.

Mr Mana estimated that more than a million liters of petrol are consumed in Phuket each day.

Petrol prices in Phuket are currently higher than in Central Thailand, by as much as 50 satang per liter, due to a transport surcharge.

“His reputation has already been affected by his unsuccessful….”