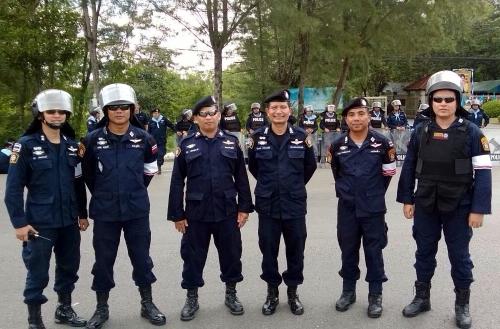 A contingent of 155 Phuket police officers has been at the airport since Monday, Phuket Provincial Police Deputy Commander Peerayuth Karachedi told the Phuket Gazette.

“So far, no flights have been affected,” he said.

Police are guarding the airport around the clock. To prevent protesters gaining access, the rear entrance to the airport has been closed off, with only the front entrance left open. Every car entering the airport grounds is carefully checked, Col Peerayuth said.

The Governor of Surat Thani, Chatpong Chataraphuti, mobilized local police to guard the provincial hall and other key government buildings, he said.

Area tourism is suffering a hit of 10 million baht per day. Everyone from market and souvenir vendors to hotel and restaurant owners are being affected, according to Yutthachai Soonthronrattanavate, president of the Association of Domestic Travel.

Tourists traveling south by road face delays caused by blockades, and transport of frozen seafood has been affected.

Mr Yutthachai sympathized with the rubber farmers, but asked that they stage their protests in limited areas, and especially, not at the airport.

Protesters could face severe penalties if they try to take over the airport.

“If the protest spirals into airport seizures, we will invoke Article 135/1 of the Criminal Code,” said police spokesman Maj Gen Piya Uthayo.

“The maximum punishment under this clause is death,” he warned.