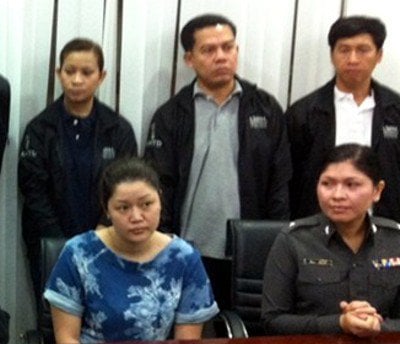 PHUKET: Immigration officials arrested a Thai woman believed to be at the center of an international human trafficking ring at Phuket International Airport on Friday as she tried to board a flight to Bahrain.

After questioning by the Anti-Human Trafficking Division (AHTD) she was charged with facilitating the trafficking of a least two women, and conspiring with three accomplices to lure women into prostitution.

“We were contacted by a Thai woman around August 18 or 19, who managed to make a covert phone call from Bahrain, telling us that she [and other women] had been tricked into travelling there and were being held against their will as prostitutes.

“We contacted local officers in Bahrain to help rescue the women from the brothel where they were being held,” AHTD Deputy Commander Col Prasert Pattanadee said at a press conference in Bangkok.

“The brothel was located at 506 Fareed 4 Apartment, Manama, Bahrain. When Bahrain Police raided the apartment they discovered nine women locked up in a small room.

“One woman that escaped the apartment made a statement implicating Ms Dujdao and another, known to us as ‘Ms Benjawan’, as the people who kept them captive in Bahrain. She said they took everyone’s passport and kept them,” he said

The same woman also indicated that there was another Thai woman involved in the ring, who was named only as ‘Pat’.

Pat is allegedly married to a Bahraini man also involved in prostitution. The woman explained to police that it was Pat who contacted hotels and entertainment venues in Bahrain in order to sell the women’s “services”.

“Once we collected and collated the evidence, we asked the Criminal Court for an arrest warrant and handed it to the Department of Immigration in Thailand,” said Col Prasert.

Although the authorities were able to arrest Ms Dujdao. Ms Benjawan and the mysterious “Pat” remain at large.

Col Prasert added that most human traffickers in Bahrain did not usually recruit the targets themselves. They tend to use women who are willing to take part in that line of work and used them to trick others, including friends, to come to Bahrain.

“They trick their friends to come by saying that their job in Bahrain pays very well. Most of the women who are working as prostitutes come from northern and the north-eastern Thailand. Once the women are there, they are forced to work and receive no money in return,” he said.

Col Prasert encouraged woman who were interested in finding legitimate work in Bahrain or other countries to be extraordinarily careful and to always double check all the information they are given.

“Anyone with information concerning human trafficking can report it directly to the AHTD hotline at 1191,” Col Prasert added.

*Correction. The initial report named the suspect arrested as Ms Barana, as is recorded in the police log book at Tah Chat Chai Police Station. The AHTD has since confirmed the woman’s name as “Yarana”. The error is regretted.