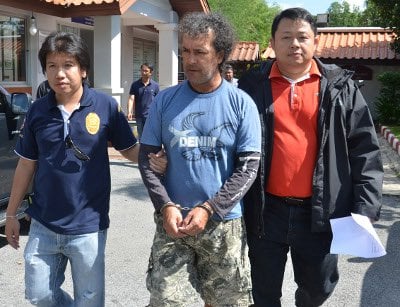 PHUKET: An American man arrested in Phuket on Friday faces deportation to the United States, where he is wanted by the California Supreme Court on drugs charges and involvement in lewd shows.

Phuket Immigration Police moved in and arrested 46-year-old Michael Anthony Matos at 6pm at an address on Nanai Road in Patong, renowned worldwide as Phuket’s party town for adult.

This morning, Phuket Immigration Police Superintendent announced the arrest and presented Mr Matos to the press.

“We received an order from the Immigration Bureau [headquarters in Bangkok] to locate and arrest Mr Matos. He is a suspect in cases involving drugs, specifically cocaine, and adult shows. An arrest warrant was issued by California Supreme court,” said Col Panuwat.

Mr Matos has been charged with illegally entering Thailand under Section 12 of the Immigration Act (B.E. 2522), which prohibits suspects wanted by foreign courts on serious charges from entering the country.

“Mr Matos has been hiding in Thailand since August 28, 2010, living with his Thai girlfriend on Nanai Road, Patong,” said Col Panuwat.

“At the moment, he is charged with illegally entering into the Kingdom. When we have finished processing this charge against him he will be deported,” he added.

Mr Matos has been transferred to the Immigration Bureau in Bangkok for further questioning, Col Panuwat told the Phuket Gazette.