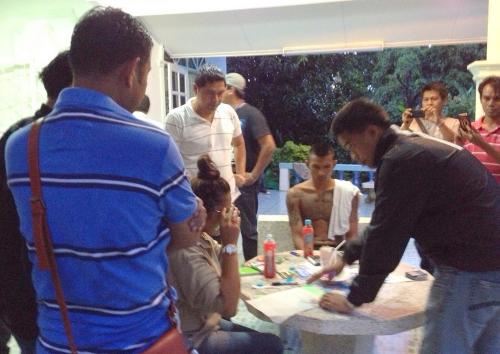 PHUKET: Police have arrested the man who injured a Russian tourist by opening fire on a car in a fit of road rage in Rawai last month.

He is charged with attempted murder and possession of an illegal firearm and ammunition in a public place, said Lt Col Jarun Bangprasert, who assisted in the investigation.

“We went to the house where we believed he was hiding, in Karon, found him there and arrested him,” said Col Jaran.

“Mr Narongsak denied the charge of attempted murder,” he said.

The shooting took place on August 17 when Maksim Klocskov, a Russian tourist, was shot when a bullet pierced the trunk of the car he was riding in (story here).

Mr Narongsak told police,”I was riding my motorcycle along the Rawai beachfront with a friend when a car came up behind us, flashing its lights and beeping its horn at us. I was so startled I almost crashed the bike.

“I tried to overtake the car to make him pull over. I was really angry, so I shot into the back of the car two times.

“I didn’t intend to harm anyone in the car. I just shot the car to scare the driver,” he said.

Mr Narongsak is being detained by Chalong Police.

Mr Klocskov has been discharged from hospital and has returned to Russia.