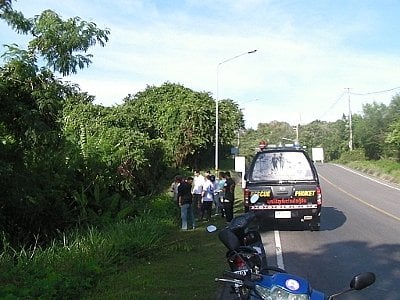 PHUKET: Chalong Police today appealed to the public for any information that may help identify the body of a man found near Phuket’s iconic Phromthep Cape earlier this month.

Chalong Police Duty Officer Boonlert Onklang this afternoon told the Phuket Gazette that the public appeal for help follows the autopsy report received by the police on Friday.

The body was found beside the road from Rawai to Phromthep Cape on January 15, he explained.

The body was in an advanced state of decomposition, lying about 20 meters past the turnoff to the well-known temple halfway down the hill toward the southern coast.

“The autopsy report shows that the body is of an Asian male, about 160cm tall, aged between 21 and 30 years old,” Lt Col Boonlert said.

“The man had pink-colored braces on his upper teeth and his wisdom teeth had been removed. He died about a week before his body was found,” he added.

The man was dressed in dark jeans, a blue worker’s shirt and a pair of shoes bearing the Lacoste logo. He also had a fish tattoo at his back.

“Local media reported that the body was of a westerner who was murdered, possibly shot or stabbed to death. Actually, we found no wounds on the body,” said Lt Col Boonlert.

“The autopsy also confirmed there were no wounds,” he added.

Lt Col Boonlert urged anyone who believes they have information that might help to call Chalong Police Station at 076-381247.

Alleged mastermind of “Ae Inside’ murder still at large