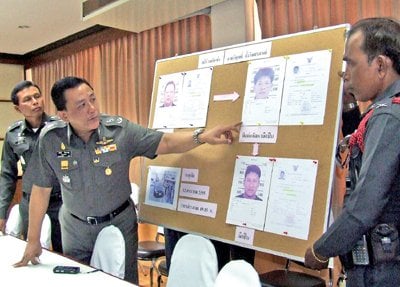 Phuket City Police Superintendent Col Chote Chidchai confirmed that police were still hunting Atsadakorn and two other suspects for their roles in the murder of Mr Wisut, who was shot dead in broad daylight on January 12.

Atsadakorn, the owner of Phuket cable TV company KPP Cable and, at the time of his disappearance, a Vice President of the Phuket Chamber of Commerce, has not been seen since Phuket Provincial Police Commander Chonasit Wattanavrangku announced a warrant for his arrest on January 21.

Col Chote also confirmed that police had been mistakenly searching for the wrong person as the alleged gunman.

Noppadol “Pae” Praisri, arrested on January 16 for his alleged part in the murder as the getaway driver, named Sanya Klinchum, 36, as the gunman.

However, Col Chote confirmed to the Gazette, “Actually, the gunman is Tossaporn Ketkaew.”

“We got the wrong name because through our investigation we learned that Tossaporn gave the wrong name to Thalang Police when he was charged with criminal association in 2007.

“He wanted to hide his name from many other crimes, including a murder in Phetchburi in 2004,” Col Chote explained.

“We realized the true name of the gunman only after we were informed by Cha-am Police that the real Sanya Klinchum, a village chief assistant in Cha-am, presented himself and showed his ID card,” he said.