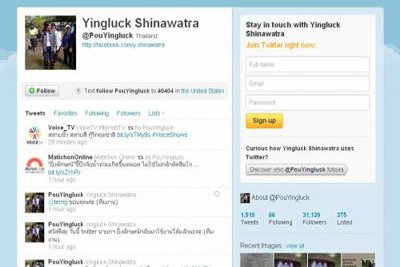 PHUKET: The Thai government welcomed an announcement from the social networking website Twitter that it will start censoring controversial content on a country-specific level, local media reported.

Jeerawan Boonperm, the permanent secretary at the Information and Communication Technology Ministry in Thailand, said last week’s announcement is a “welcome development.” She said the Ministry will contact Twitter to discuss how they might be able to collaborate, according to the Bangkok Post.

Twitter received a storm of criticism last week when it announced that it will block tweets and user profiles in some countries if they are found to violate local laws. The new policy allows Twitter to block, for example, pro-Nazi content in France and Germany where this is illegal.

Previously, Twitter was not able to block content on a local level and was instead forced to remove the content globally. “Starting today, we give ourselves the ability to reactively withhold content from users in a specific country, while keeping it available in the rest of the world,” the US-based company said in a blog post last week. It said it would communicate to users when and for what reason content is withheld.

Jeerawan said the Thai government already receives “good cooperation” from companies such as Google and Facebook and that it would work with Twitter, where its users post some 250 million messages a day, to ensure tweets disseminated in Thailand are in compliance with local laws.

The Thai government has blocked thousands of websites in recent years, mainly for violating lese-majeste or pornography laws.