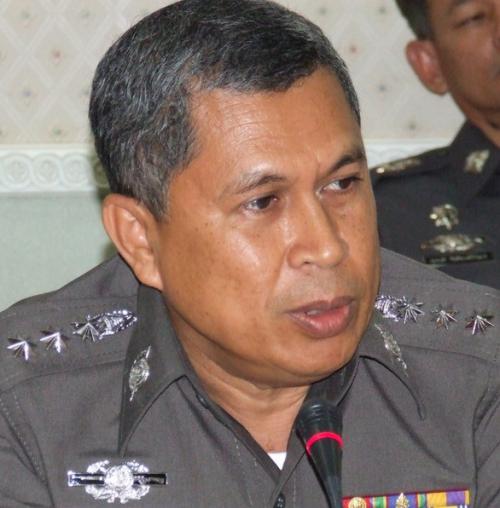 PHUKET: Phuket Police are on the lookout for a man wanted for triple homicide in Phang Nga.

The news follows the Takuapa District Court issuing an arrest warrant for Somsak Wongsri, who according to an eyewitness executed three people on December 22.

The executions took place in a rubber plantation in Takuapa district.

“We are still very sad and confused by my father’s death. We do not understand why this kind of thing had to happen to us,” Ms Treechada told the press.

“My father was a good man and our family is familiar with Mr Somsak. We have never had any argument with him,” she added.

Ms Treechada said she did not know how her father could have been murdered over a land dispute. “My father was not involved in the dispute between Mr Prajuab, Mr Sarawut and Mr Somsak,” she said.

The alleged dispute concerned Mr Prajuab and Mr Sarawut refusing to allow Mr Somsak to cross their land to access his plot.

The country music star said her family and the families of the other murder victims are in fear for their lives while Somsak remains at large.

“We are scared because the police have yet to catch Mr Somsak and now we have heard that he wants to kill two more people. We are frightened because we have no idea who they [the next alleged victims] will be,” she added.

Maj Gen Chalit told the Phuket Gazette today that he was unaware of any death threats against other potential victims until he saw a report on television.

“I saw it on the news, but we have yet to confirm whether or not this is accurate,” he said.

Gen Chalit would not confirm or deny that police were searching Phuket for the murder suspect.

“Police in Phuket have been alerted to be on the lookout. We know the general area where we believe Mr Somsak is in hiding, but at this stage I cannot reveal any more information,” Phang Nga Provincial Police Commander Chalit Kaewyarat said.

“Phang Nga Provincial Police and officers from Police Region 8 are working together in the search for the suspect. We believe we will be able to catch him soon,” he added.