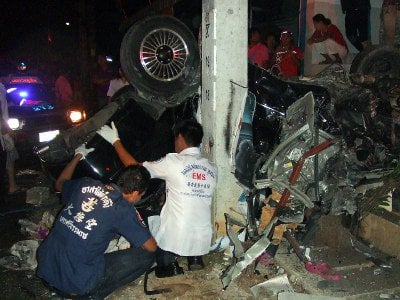 PHUKET: One man died and another was seriously injured in a high-speed accident in the north of Phuket early this morning.

Lt Kraisorn Misang of Thalang Police told the Phuket Gazette that at about 4am he received a report that a car had hit a power pole in front of the Caltex Gas Station near Wat Srisoonthorn on Thepkrasattri Road, north of Phuket Town.

At the scene, officers found a black Nissan Cefiro upside down, wrapped around a power pole.

The driver, Teeradet Prommas, escaped serious injury and exited the vehicle on his own.

Songpan Yokchua, who was sitting in the front passenger seat, died in the accident.

Kusoldham Rescue workers raced to free Teeradet’s 21-year-old brother Panlop who was trapped in the back seat of the wreck.

“It took about half an hour to get Panlop free. He suffered serious injuries, including two broken legs,” said one of the rescue workers.

Witnesses told police that the car was heading north away from Phuket City at high speed when it struck the power pole.