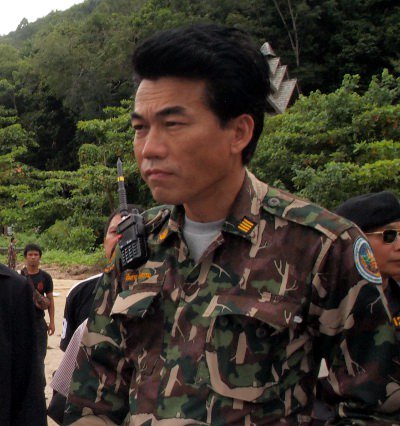 “Since I started my work here, I have not received any death threats from anyone. I have not heard any reports of any other officers receiving death threats, either,” chief Cheewapap said.

“However, I have been warned by some people to be ‘careful’. No one has ever raided this area [Sirinath National Park] before and the projects that are being investigated are big money projects costing more than a billion baht.

“I have been told that what I am doing could be a landmark case in history.

“Do I get scared? Yes, I do. I have family and people I love waiting for me,” he added.

Only needing to check the boundaries of the park via aerial photographs, having already clarified the legality of some of the ownership documents for land plots under investigation, Chief Cheewapap is confident he will meet the September 25 deadline set by Director-General of the Department of National Parks, Wildlife and Conservation Damrong Phidet.

“I will not allow any illegal activity to rob our country of its land. If we take no action on the issue, other countries will not have faith in us and might not invest in Thailand in the future – we have to make this right.

“I would like to pass along a message to the people who might be thinking about hurting or threatening national park officers on the case: You can’t stop us. Even if you dispose of all of us, there will be others from the office ready to take our place and continue our work in Phuket,” he said.

“I am doing my best here. I affirm that I will work with fairness and not accept any bribe from anyone,” he added.

“He spoke well, looks fit and he wants to have one more hurrah.”