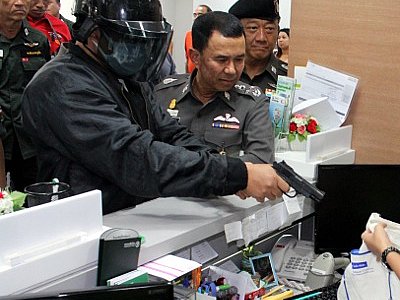 PHUKET: The Phuket “Minute Man” re-enacted both of his armed bank robberies, which he has confessed to, in front of police this morning after they tracked him down and arrested him late yesterday.

A reported 2.7 million baht was stolen in Anusit Kaewmookda’s latest Kasikorn Bank branch heist, and about 650,000 was stolen in the January 29 robbery at a KBank branch at the Tesco Lotus Chaofa shopping complex in Wichit.

At the press conference, also held this morning, Mr Anusit explained that he targeted the Kbank branch because there was no security guard on duty.

“I would like to advise every bank to have their own security guard stationed at every branch,” Mr Anusit said.

“I would also like to advise bank owners and bank employees that anytime your bank is robbed or you are in a ‘robbery situation’, you should just run away. If you run away, the robber will not get the money and I believe that a bank robber has no intention of killing anyone,” he said

Mr Anusit also dispelled the widespread speculation that an “inside man” had played a role in the heist. “I committed the robbery completely alone,” he said.

He explained to the press that he had scouted out the KBank location ahead of time, and had even made a withdrawal at the branch.

“I noticed that if a counter didn’t have enough money to cover a withdrawal, then the teller would go to counter number one, which is how I knew which counter to rob,” he explained.

The gun Mr Anusit used during the robbery was one he found about five years ago, when he was helping a friend move during the floods in Bangkok, he told police.

Most of the 649,000 baht Mr Anusit got away with in the first heist was used to cover outstanding gambling debts and the costs of a “big” motorcycle, Mr Anusit said.

“The rest I squandered,” he told police.

“I robbed the second KBank branch because I needed 20,000 baht to cover my gambling debts,” he said.

The gambling debts were accrued through illegal lottery purchases and gambling on football, he added.

Royal Thai Police Advisor Gen Rachata Yensuang thanked all the officers on Phuket who had participated in catching Mr Anusit.

“And thanks to everyone who gave us information that eventually led to the man’s arrest,” Gen Rachata Yensuang added.

Phuket Police chief Maj Gen Choti Chavaviwat said that the reward money (100,000 baht provided by the Phuket Police and 100,000 provided by KBank) would be divided among those who had made a significant contribution to the capture of Anusit.

“We have the names and contact information for everyone in the public who made a significant contribution,” said Maj Gen Choti.

“Anyone thinking about committing a crime in Phuket, be aware that it will not be easy to get away with. We have capable police officers, Phuket residents and a strong network that is always prepared to take immediate action against perpetrators, he said.

“Anusit has been charged with armed robbery of the bank, illegally carrying a firearm, and using a vehicle to escape the scene of the crime,” he added.