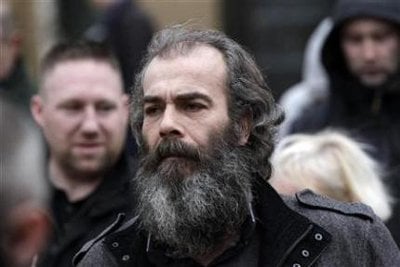 PHUKET: An Irish nationalist acquitted earlier this year of the murder of two British soldiers in Northern Ireland was arrested yesterday in connection with the fatal shooting of a prison officer, a security source said.

The murder of David Black, 52, on Thursday was the first killing of a Northern Irish prison officer in almost 20 years and the fifth fatal attack on a member of the security establishment since the 1998 Good Friday peace deal.

The pact largely ended three decades of sectarian conflict in Northern Ireland between Protestants loyal to British rule and, mostly Roman Catholic, nationalists who want to unite with the southern Irish republic.

Black, a father of two, was shot while driving his car in County Armagh. He worked at the top security Maghaberry Jail where militant nationalists have been protesting against their living conditions.

Three men have been arrested in connection with his shooting, police said.

Colin Duffy, 44, was picked up at his home in an early morning swoop in Lurgan, County Armagh, the source said, while a second 31-year-old man had been detained in Lurgan, where there is a strong pocket of militant nationalists.

A 29-year-old man was arrested south of the Irish border in the county of Leitrim later, police said.

Life-long Irish nationalist Duffy was acquitted in January of the murder of two British soldiers shot dead outside Massereene army barracks in Antrim by the ‘Real IRA’ in 2009.

Co-accused, Brian Shivers, was jailed for life but Duffy successfully argued that police had planted his DNA, which was found in the car used by the killers. Duffy had been acquitted of murdering members of the security forces twice before.

Irish nationalists want the British army to leave Northern Ireland and for the province to unite with the Republic of Ireland.

Black, who was approaching retirement, was killed in a hail of bullets after a car pulled alongside him as he drove to work.

The vehicle, found later, was registered across the border in Dublin. Irish Prime Minister Enda Kenny has pledged the Irish authorities will do all they can to help in the investigation.

The ‘Crimestoppers’ charity has offered up to 10,000 pounds for information leading to the conviction of those responsible for the murder.