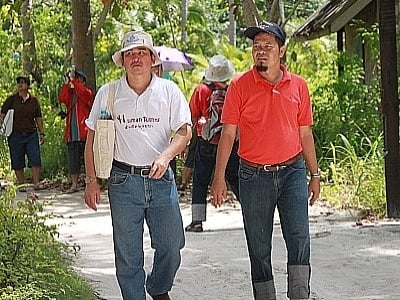 PHUKET: The Human Rights Commission of Thailand is investigating claims by villagers on Koh Racha Yai that the Phuket Land Office is refusing to issue title deeds for plots that families there have been living on for generations.

The land in question is not in a national park and is not registered as any type of protected area.

The villagers also allege that while the Land Office is snubbing their applications for title deeds, it is issuing title deeds for developers who have no relation with any persons living on the island.

According to the complaint filed with the commission, the Phuket Land Office in the past two years has issued Chanote titles for a plot of 99 rai, 48 rai, one of about 9 rai and a fourth covering about 12 rai.

The four plots now belong to three different investors, with all the Chanote titles being issued by “upgrading” existing NorSor 3 (“Certificate of Use”) documents.

Over the same two years, however, 23 villagers have been denied any form of land ownership titles to land their families have been living on for more than 50 years.

Community leader Yutthana Chandi explained to the Gazette that the 23 villagers seeking land titles ‘own’ 30 plots covering more than 500 rai on the island.

According to the investigation notes of the Human Rights Commissioners, the Phuket Land Office formally recognizes that the community has been living on Koh Racha Yai since at least 1947 and that the land that the villagers have repeatedly applied to claim is not in any forest preservation area or national park.

Sarit Chandi, the elected president of a local conservation group on Koh Racha Yai, explained to the Gazette, “The Land Office has records showing that we have been applying for land title deeds since 1999, but the office has consistently denied our requests.

“But they have denied our requests because say the land cannot be issued title deeds because a ministerial regulation issued in 1994 says we must have some document – issued by the Land Office – to prove that we legally occupy the land.

“How can we do that when they have never – after 50 years – acknowledged that we have been living here? And now they are issuing land title deeds to people who have never lived on the island,” Mr Sarit said.

Mr Yutthana continued, “Everyone was silent about this until we saw one national newspaper publish a notice of two land plots – one of 99 rai and the other of 48 rai – being sold at an auction in 1998.

“The advertisement said that the land plots had been issued NorSor 3 documents and the plots were not located in protected forest areas.

“So we have been asking since 1999 for our right to have deeds issued for land that we have been living on for decades, but we have yet to receive any response,” Mr Yutthana said.

The villagers tried everything they could think of, including travelling to Bangkok to explain to various organizations their plight. Officers from some government agencies came to the island to inspect the land in question.

The visits gave the villagers hope, but the process ended up as no more than an exercise in futility.

“Before, they said we could not be issued any land documents, so why today are the deeds issued to only a select group of people. We are absolutely dumbfounded with that,” said Sarit.

The island altogether covers about 3,000 rai, including the rocky outcrops into the bays, with about 2,000 rai being occupied by resorts, restaurants, businesses, farms and homes.

“Another worrying problem is that two main roads [both dirt] are now on privately owned land because the roads are not registered on the Land Department’s main survey map. It is very likely that in 10 years those roads will no longer be open to the public,” said Mr Yutthana.

One road is one meter wide and 40m long, and separates the 9 rai and 12 rai plots. The other road is 2m wide and 100m long, and crosses the 48 rai plot to the beach on Siam Bay.

The Human Rights commissioners in their conclusion noted that: as no persons had filed a protest or complaint against the landlord for claiming land that incorporated a public thoroughfare – that had been in use for more than 10 years – a title deed was issued for the plot.

“The owner of the 48 rai plot once closed the path heading to Siam Bay, but has since reopened it,” said Mr Yutthana.

Jakkapong Tanawworrapong and Barami Chairat, the two commissioners who led the team of nine to investigate the claims, advised the villagers to discuss the problem with grassroots organizations.

However, the villagers explained that they had already raised the problem with Rawai Municipality and the Rawai Subdistrict chief (kamnan), but no progress had been made.

“Try it again, but this time get documentary evidence to prove you have raised the issue with them,” urged Mr Barami.

“That way, if the officers don’t do anything about it, then you can file complaints to higher-level organizations,” he said.

One of the commissioners told the Gazette that it would take months to compile evidence, especially aerial photography confirming where the plots are, before the commissioners can pass on the results of their investigation to the relevant organizations.