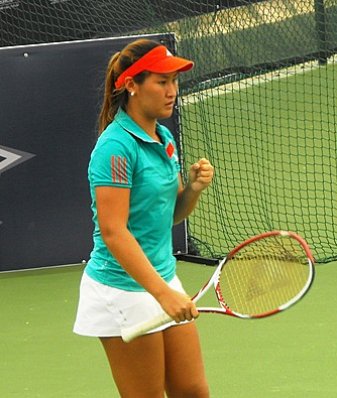 The only seeded player that failed to progress from round one was Yuliya Beygelzimer from Ukraine. The number eight seed had to retire after the fourth game of the second set with an injury, having already lost the first set 6-0 to Marta Sirotkina of Russia.

Two other wild card entries from Thailand, Nicha Lertpitaksinchai and Tanaporn Thongsing faced each other with Nicha securing a 6-4, 6-2 victory over her compatriot.

Varunya Wongteanchai, also from Thailand failed in her bid to reach the second round losing after a second set tie-break 6-1, 7-6 to Misa Eguchi of Japan.

Winner of the first week’s tournament Dinah Pfizenmaier of Germany will look to exploit her clay technique against another Thai, Luksika Kumkhum around noon.

In doubles, the sisters Wongteanchai (Varunya and Varatchaya) are up against the Ukrainian pairing of Yuliya Beygelzimer and Irina Buryachok should Yuliya be passed fit to play.

Noppawan again takes to the courts later in the afternoon to join with Saisai Zheng of China as the number one seeds against Thailand’s Napatsakorn Sankaew and Tanaporn Thongsing.

Play begins at 10am at TSLC with last matches scheduled for 3pm.

Phuket Live Wire looks at Windows 8: ‘You probably won’t like it’