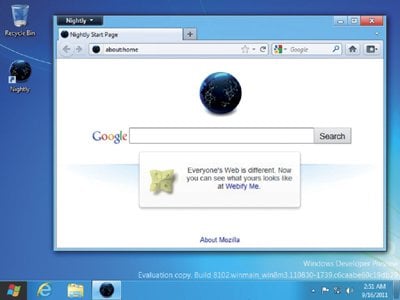 PHUKET: Even if you have no intention of getting Windows 8, there are currently forces at work in the computer industry that will have an enormous impact on what kinds of computers are available in the near future, and how much they will cost.

If you’re thinking about buying a new computer, you need to understand what’s about to happen.

Sometime in the next week or two, Windows 8 will be complete. In Microsoft-speak it’s known as “RTM” or “Release to Manufacturing.” Shortly after Windows 8 hits the RTM point, Microsoft will ship copies of Windows 8 to computer manufacturers like HP, Dell and Lenovo.

MS will also ship copies to its major corporate customers. And it will post full-fledged copies of Windows 8 on its MSDN and TechNet web sites, where subscribers (who pay US$200/year for the privilege) will be able to download and use a copy.

On October 26, a day Microsoft has marked as “General Availability” day, Windows 8 will be made widely available to the world.

That’s going to change the nature of the PC business in several ways. First, hardware manufacturers are going to be stumbling all over themselves to get “Windows 8 Compatible” computers into the market stream. Last week, Intel said there were 140 different Ultrabooks poised to be released in short order, and 40 of them will be touch sensitive, thus fully qualified to run Windows 8.

Yes, you read that correctly: 140 new models of Ultrabooks will be coming out by October 26. That doesn’t include new models of laptops or desktops. Just the little MacBook Air-wannabe Intel Ultrabooks. Intel’s projection is that the typical price of an entry level Ultrabook will fall from US$1,000 (roughly comparable to a MacBook Air) to US$700 by the time the holidays get here.

Let me translate that for you: now is the worst possible time to buy an Ultrabook. The market’s going to be absolutely flooded with them by Christmas. And I bet three-quarters of those new models are discontinued or superseded by February.

This unleashing of so many models, so dependent on Windows 8 (which, I don’t expect to sell well at all to the Ultrabook crowd), means that prices will drop like a rock around Christmas time, if not earlier.

You don’t need to worry about buying a computer with Windows 7 on it, if you’re afraid that the only PCs available next year will run Windows 8. Ain’t gonna happen. Windows 7 is going to be around for a long, long time.

But it does complicate matters for those of you who are still running pirate versions of Windows. It’s going to get harder and harder to find “real” copies of Windows 7. I’ve written about getting genuine copies of Windows 7 several times in the past three years. You can still pick up a copy for 1,200 baht (US$40) if you have a friend in the States, and you buy three at a time.

Unlike Windows 8, Windows RT really does go head-to-head with the iPad. It’s a locked-down system, just like the iPad, which means you can only install apps that have been pre-approved by Microsoft. Windows RT runs the Metro interface, which looks a little bit like the iPad and a lot like the Microsoft Phone (which hasn’t sold much either).

The Windows RT machines that are due to come out on October 26 are based on a different kind of computer chip, designed by a company called ARM, which are quite different, internally, from the Intel PCs we’ve come to know and swear at.

They’re fast and light and don’t generate much heat. They work well with nice screens (at 1366 x 768 pixels and up). Their batteries last eight or ten or more hours. And they should be as cheap as an iPad. “Should” being the operative term.

Windows RT tablets will have one big advantage over iPads and various Android tablets (including the new Nexus, which I hear is stunning). Windows RT comes bundled with a copy of Office that’s built for the touch interface. That’s quite an accomplishment, actually, and one that makes a difference for people who have to work with Word, Excel and PowerPoint documents.

Microsoft’s biggest problem with selling Windows RT machines? Their basic applications, at this point, aren’t worth the powder to blow them to Cupertino. Mail, Calendar, People (the Windows 8 contacts manager), SkyDrive and Photos don’t hold a candle to the iPad counterparts. The Metro Music and Video apps are just extended advertisements, trying to sell you more music and videos.

Nothing comes close to, say, the iPad Mail app, or iPhoto, or iPod. And the Windows Store isn’t anywhere near as compelling as the Apple AppStore or even iTunes.

All of that will probably change in a year. Microsoft’s pouring a lot of money into Windows 8, and it’s been known to back questionable horses for a long, long time. (It’s still losing something like half a billion dollars a quarter to the Bing search effort.) Whether Microsoft can get a little bit of market share back with Windows RT remains to be seen.

On a personal note: I have finished the initial edits on Windows 8 All-In-One For Dummies. It’s the thickest book I have ever written, at well over a thousand pages. Putting it together was hellacious, particularly with Microsoft changing things in mid-stream. I was planning on spending three to four months on the project; ends up it took more than five. Anyway, I have one more intense editing period coming up, when we get the final version of Windows 8. But, at last, I can see light at the end of the tunnel, and life should be returning to almost normal before too long.

Computer Clinics
I’m thinking about starting up the Sunday Computer Clinics again, but need a larger place to hold them. We were drawing 40 to 50 people during the sessions early this year, and I bet it could double in size if there were enough room. If you have any suggestions, drop me a line.

I’m also more interested than ever in starting a Mac/iPad/iPhone clinic. I have a Mac with a sound problem that does not succumb to anything and my iPad is a constant source of amusement and frustration. If you’d like to run one of the sessions, or you know someone qualified who could be coerced, let me know.

In the interim (and while I sneak away for a vacation in late August) the Wednesday afternoon computer clinics and Sunday morning informal computer get-togethers continue unabated. Drop by if you have a question. Hands down, they’re the best way to get your internet questions answered, your PC problems solved. And they’re free.

Belgian ‘Most Wanted’ arrested in Phuket