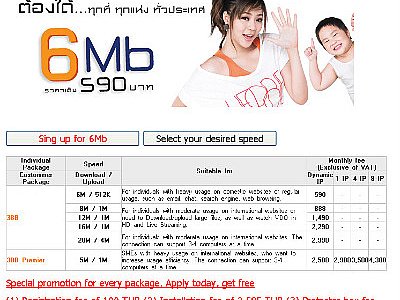 PHUKET: I’m tired of paying so much for ADSL. I have ADSL lines in three of the four Sandwich Shoppes (CAT EV-DO in Villa Market), plus one in the bakery and two in my home office. That’s six ADSL lines.

About a year ago, I switched one of the lines at my home office over to True 10 Mbps. It costs half as much as the 3BB Premiere service, and the international download speeds are twice as fast.

In December, I switched the line at Sandwich Shoppe Laguna to the 3BB Indy 12 Mbps package, for 1,600 baht per month.

MaxNet Premiere has a maximum of 10 users per line. And, besides, the cheap Indy lines won’t even connect to overseas – they’re only for use inside Thailand. That’s what the lady said.

It’s much easier to spend US$10 a month and get a server someplace with reliable connections and big bandwidth. You don’t need a fixed IP address in Phuket.

While it may be true that 3BB “Premiere” service limits each DSLAM (that’s what the box on the telephone pole is called) to 10 lines, there’s no guarantee that those 10 people will use their connections gingerly. You may well get better speeds with the 20-line Indy service, unless one of your 20 neighbors likes to download torrents at the wrong times.

And as far as accessing international web sites, sorry, but if you can get to a site inside Thailand, you can also get to sites outside of Thailand. The internet doesn’t care where you’re headed. Anyone who tells you otherwise doesn’t know what they’re talking about.

Here’s what I found. All of these times are international download speeds, measured using our regular test at phuketinternetspeed.com

You can slice and dice those numbers many different ways, but the bottom line to me is that there’s very little difference in speed between 3BB’s MaxNet Premiere 4 Mbps package and its Indy 6 Mbps cousin – at one-fourth the cost.

Take a look at the numbers for yourself. They’re posted on the Phuket Internet Speed reporting site, www.phuketinternetspeed.com. While you’re there, sign up and start posting your speeds, too.

Sometimes you don’t get what you pay for.

The next Phuket Computer Clinic meeting will be this Sunday (March 13) from 10am to midday at Sandwich Shoppe Laguna, near the entrance to the Laguna complex. Look for us in the newly renovated (and almost complete) Meeting Room, at the back. Sponsored by the Phuket Gazette and Khun Woody’s Sandwich Shoppes.

Able Wanamakok will be conducting a series of three seminars called “Facebook 101” starting on March 19. The free seminars will meet every Saturday at 10am at The Meeting Place in Sandwich Shoppe Laguna.