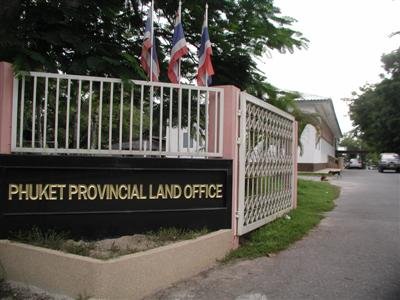 PHUKET CITY: Holders of Sor Kor 1 land possession papers have only until early February to apply for upgrades to full land title deeds, the Phuket Provincial Land Office has announced.

Land Office chief Paitoon Lertkrai said that all Sor Kor 1 papers, which allow holders to use land for commercial purposes, will expire on February 6 next year.

“To prevent unnecessary wasting of time and other difficulties, holders of Sor Kor 1 papers seeking upgrades should apply by February 6, 2010,” he said.

On that date, all existing Sor Kor 1 papers nationwide will officially expire under the Land Code Amendment Act number 11, put in place by the Democrat-led government and announced last year.

Those seeking upgrades after the specified dates will only have petitions accepted if accompanied by a court order.

Such applicants can expect the process to take a lot more time, he said.

“It normally takes about three months to process title deeds issued on the basis of Sor Kor 1 possession but from February 7 onwards it will take a lot longer,” he said.

Some have criticized the Democrats for putting in place the reform measures that will fast-track the upgrades from Sor Kor 1 to outright ownership over such a short time frame.

This will make it virtually impossible for thorough, case-by-case investigations to be conducted where irregularities may exist, they say.

There are about one million Sor Kor 1 plots nationwide and many are located in prime locations for real estate development.

For more information contact the Phuket Provincial Land Office (Tel: 076-212 103) or any of its district or local branches.