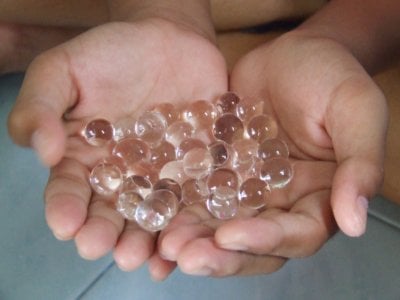 PHUKET: A family in Phuket had a close encounter with unidentified falling objects at the weekend when about a hundred small spheres ‘dropped from the sky’ onto their roof and garden.

The family of six said the transparent balls fell on their home in Wichit about 9am on Sunday directly after a rain shower.

“After the rain had stopped, we heard the sound of things falling on the roof,” said home owner 52-year-old Paweenarak Boonsiew.

Her son then went outside and discovered more than a hundred small, transparent balls on the ground.

The spheres each measure about one centimeter in diameter and are soft and pliable. They have no coloring and do not give off any odor.

Officials from the the Phuket Medical Sciences Center later collected some of the spheres for further examination, leaving the rest with Ms Paweenarak, who said she would keep them for good luck.

A spokesperson for the center told the Gazette that the collected spheres had been sent by plane to the Department of Medical Sciences in Bangkok.

“The findings will be announced as soon as possible,” said the officer.

The appearance of the balls has stirred much excitement among villagers, one of whom was tempted to chew one of the balls, before being reprimanded by Ms Paweenarak and told to wait for the results of the science center’s findings.

Many locals also see the event as a fortuitous omen and are making lottery predictions based on numbers surrounding the phenomenon.