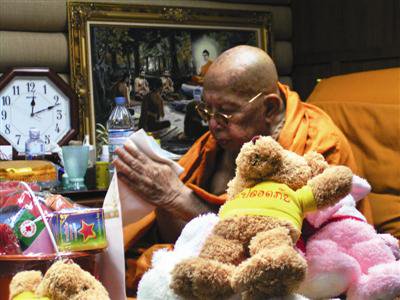 PHUKET CITY: More has been revealed about the amazing life of Luang Pu Supha, claimed by adherents to be the oldest man in the world.

Luang Pu Supha, abbot of a temple named after him in Chalong, is preparing to celebrate his 113th birthday in Phuket next week.

Government-issued identification records presented to the Gazette show he was born on September 17, 1896.

Thanapong Korudom, President of the Wat Luang Pu Supha committee, said he would like to invite Guinness World Records to come to Phuket and verify that Luang Pu Supha is the oldest living man in the world.

Luang Pu Supha has lived through several historical events, including Siam changing its name to Thailand in 1939, the Japanese occupation of Thailand in 1942, Thailand becoming the 55th member of the United Nations in 1946, the coronation of HM King Bhumibol Adulyadej in 1950 and the 2004 tsunami.

In his long lifetime, he has traveled the world in search of what Khun Thanapong says is ‘a life dedicated to truth’.

In 1905, at the age of nine, his father took him to study Buddhism at Pai Yai Temple in Ubon Ratchathani.

In 1916, the young monk embarked upon his official ordination pilgrimage that took him into the mountains of Laos, where he was ordained as a monk.

Six years later, he traveled to Burma, where he met other Thai monks who were on a pilgrimage to India.

Joining the monks, the young Luang Pu Supha set off on a series of adventures which took him to China, then Europe, before embarking on a mammoth journey back to Thailand.

In 1957 at the age of 61, Luang Pu Supha arrived back at his home province and visited his relatives for the first time since he was nine.

Piyawat Siihaveerachart, another committee member and close friend of Luang Pu Supha, said the revered monk came to Phuket when he was in his sixties because he wanted to help the impoverished sea gypsy community on Koh Sireh.

“The villagers didn’t follow a religion, but Luang Pu Supha stayed with them, taught them about Buddhism and built a temple,” he said.

Luang Pu Supha’s birthday celebrations will begin on September 16, starting with a sermon by the head monk from Chonpratharn Rangsarit Temple at 4pm.

Starting at 6.09am on the morning of September 17, monks will honor Luang Pu Supha with mass prayer ceremony at the temple.

The revered cleric will then donate 100,000 baht to Vachira Phuket Hospital and award scholarships to 139 students who will attend his birthday celebrations.

After releasing 119 birds into the wild, he will take part in a mass sit down lunch with 200 monks starting at 11am.

Members of the general public will be able to catch a glimpse of the revered monk at 2pm, when a mass prayer is held and flower offering ceremony is held on temple grounds.