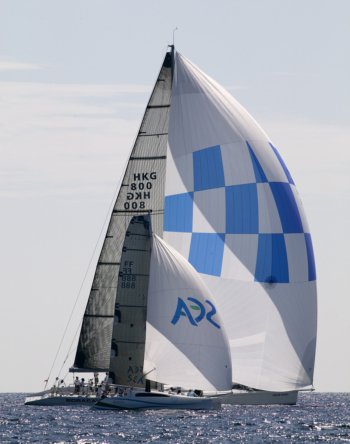 PHUKET: With over 110 yachts and 18 dinghies entered in 15 different classes, this years Phuket King’s Cup Regatta is shaping up for another bumper season. The fleet contains a healthy contingent of old adversaries as well as some new contenders.

Ray Roberts on Evolution Racing and Neil Pryde on Hi-Fi were expected to set the running in the Racing Class but it was Chris Mead’s Full Metal Jacket which scored a surprise victory yesterday in the opening race of day one.

Brent Gribble’s Twin Sharks won two out of three races in the Firefly 850 class and Fergus Wilmer and Henry Kaye’s Thor set the pace in the Multihull Class – winning all three races.

The IRC 2 class was also competitive with Stuart Williamson’s Endeavour of Whitby winning the opening race, Alfie Rowson’s The Beaver the second and Peter Dyer’s Team Bentley the third.

Peter Dyer, skipper of Team Bentley, thinks the IRC 2 class is going to be closely contested this year, ‘It was a great day’s racing and I am happy to be in the lead after the first day. I think Koji Kikuchi’s Puma is going to be a threat and the Royal Thai Navy has entered three boats this year and they are always competitive,’ he said.