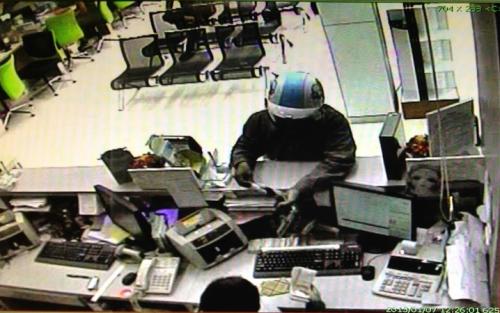 He made off with an estimated 260,000 baht, police reported.

The man entered the bank wearing a white-and-blue, full-face helmet. He pointed a gun at one of the cashiers and demanded that she place all the cash she had near to hand in a white cloth bag that he handed her.

The man was described as of medium build and was wearing a gray jacket and black jeans.

Police are now searching for a blue-and-white Yamaha Fino motorbike used as the getaway vehicle.

Witnesses at the scene reported that the motorbike was not fitted with license plates.

“The bank did not have a security guard on duty when the robbery took place. We believe it was well-planned. The man parked his motorbike in the street next to the shopping complex, which is a very quiet street. He then walked across the car park and into the bank to rob it,” he said.

“We are still questioning witnesses as to what happened. We have alerted all police stations across the island as to the description of the motorbike and what the robber was last seen wearing,” he said.

The exact same branch was robbed at gunpoint by “Minute Man” Anusit Kaewmookda, who made off with 650,000 baht in less than 60 seconds on January 29 last year.

Anusit was arrested on November 3, while on the run, after robbing the KBank branch on Thepkrasattri Road in Rassada four days earlier. In that robbery, Anusit made off with a reported 2.7 million baht. Again, the robbery was conducted in less than 60 seconds.

Today’s robber reportedly took less than 37 seconds to pull off the robbery and make his getaway.