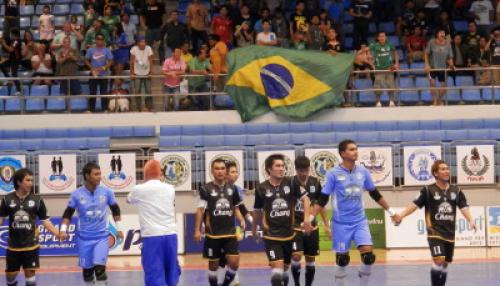 Phuket United won their last home game 7-3 against Lampang United to move up to 7th in the league.

Phuket United started the stronger of the two teams and took the lead in the 5th minute through Jardel.

This early setback forced Royal Navy to attack but a resolute Phuket United defense kept the league’s 4th placed team at bay. A Phuket counter attack in the 14th minute culminated in Jackson Santos heading the ball past two defenders, before calmly slotting it into the bottom corner from just outside the box to put Phuket 2-0 up.

Royal Navy continued to attack at will and it was only a matter of time before they scored. Veerapong Chaiwong calmly chipped the ball over the advancing keeper to bring the score to 2-1 in the 18th minute. Thai international player Jetsada Chudet scored in the 20th minute to bring the game level going into half time.

The second half was end-to-end with both teams looking for a third goal. New signing, Marcos, endeared himself to the Phuket United fans by taking the ball past a Royal Navy defender with ease and then scoring with a powerful shot from outside the area, sending the partisan crowd into a frenzy. Benjarong Panphob scored Phuket’s 4th goal from inside his own half into an empty net in the 37th minute, as Royal Navy sacrificed their keeper looking for a way back into the game.

Phuket United moved up to 5th in the league after this victory and their next game is against CATFC at Fashion Island, Bangkok on January 9 at 10am.

Dubious Dane fined, sentenced but not kicked out of Phuket