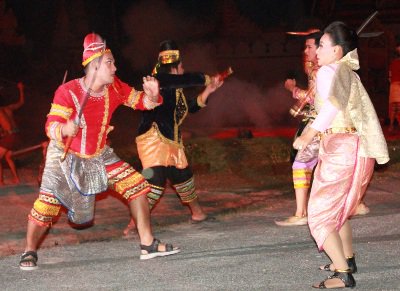 Phuket Governor Tri Augkaradacha chaired the opening ceremony for the event, which got underway at 7:30pm at Thalang Victory Memorial Field.

Gov Tri played the part of Rama I, while his deputy Chamroen Tipayapongtada played his arch-enemy, the commander of the Burmese invasion force.

The 12-act re-enactment took place on an elaborate set using 1,200 performers from Phuket Rajabhat University and other schools in Phuket and Phang Nga.

“On March 13, 1785, during the reign of King Buddha Yodfa Chulaloke [Rama I], the two heroines fought wisely against the Burmese army and won. So the day is remembered as Thalang’s day of victory,” said Gov Tri.

Phuket Provincial Administration Organization chief administrator Manop Leelasuthanont told the audience, “Phuket is a world-class tourist attraction with beautiful natural resources as well as a unique history. Our ancestors protected the island with their blood and we should never forget their bravery,” he said.

One visitor told the Phuket Gazette, “I live here, but this year is my first chance to see such an attractive re-enactment of the war. I am so proud to be a Thalang native today.”

A repeat performance of the re-enactment will be held again tonight and tomorrow night, with both performances starting at 8:30pm

Phuket free of bird flu, but taking no chances