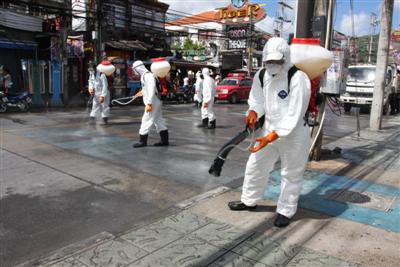 PHUKET: Phuket has not had a recorded single case of H5N1 bird flu in five years, but public health workers are still training to recognize and fight the dreaded virus in the case of any future outbreaks.

The stated purpose was to refresh Phuket Provincial Health Office (PPHO) workers in how to identify possible cases of H5N1 infection and treat patients effectively, increasing confidence in the public health system among tourists in the process.

PPHO Deputy director Wiwat Seetamanotch told attendees that although there has not been a single recorded case of bird flu infection in Thailand in more than three years, the situation in some neighboring countries is a source of concern.

“Bird flu is still spreading among fowl in some countries. As a result, no country is truly risk-free. If the virus were to mutate, it could increase the risk of infection in humans. If such a mutation allowed it be spread directly from human to human, it could become very dangerous indeed,” said Dr Wiwat.

Dr Wiwat thanked attendees for their past efforts in dealing with flu outbreaks and reminded them that the current Ministry of Public Health policy calls for strict monitoring, both of fowl and humans.

“We need to always be prepared for any situation,” said Dr Wiwat.

“If everyone cooperates well and strictly follows procedures, Phuket and Thailand will remain safe from bird flu and other flu strains,” he said.

Concerns about about the bird flu virus being genetically manipulated into “Doomsday Virus” increased significantly two months ago when a team of Dutch researchers announced they had developed a new strain that could pass from mammal to mammal.

They later downplayed fears of a mass pandemic, saying they were only able to spread the virus in lab animals – in this case, ferrets – by direct injection into the windpipe.

Nevertheless, the announcement led to calls for better international oversight over such work and raised fears of the consequences if a genetically-modified strain of the virus, one capable of air-to-air transmission among humans, were to fall into the hands of terrorists.

Genetic modification of the H5N1 bird flu virus is a concern among epidemiologists due to its high mortality rate in humans, as high as 60% according to World Health Organization statistics.

Phuket Heroines brought to life in Battle of Thalang