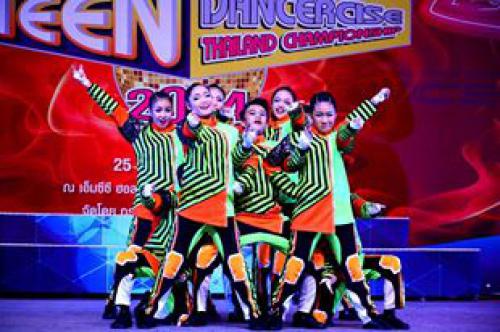 PHUKET: A team of young dancers from the Ban Bangneaw Municipal School in Phuket Town won the national finals of the “To Be Number One” Teen Dancersize Competition held in the events arena at The Mall Bangkapi in Bangkok on January 26 and 27.

Competing in the Junior Division for students aged 6 to 9, the HERO team wowed the panel of celebrity judges with their precision and high-energy performance in front of a standing-room-only crowd to win the competition for the second year in a row.

The team, sponsored by the Phuket Provincial Health Office, won a cash prize of 30,000 baht, adding to the 20,000 baht they won in their age class at the Southern Regional Championships at Jungceylon in Patong on December 15.

The proceeds are used to pay for the considerable costs of costumes, props, transportation, hotel accommodations and future team development.

Another team from Ban Bangneaw School, “AHA”, won their age group in the Southern Regional Championships in December and got an honorable mention in the pre-teen competition finals in Bangkok.

The competition is part of the “To Be Number One” campaign of HRH Princess Ubol Ratana Rajakanya aimed at keeping kids away from the dangers of drugs.

For complete results of all three divisions, click here.

To view a video of the dance performances, click here.