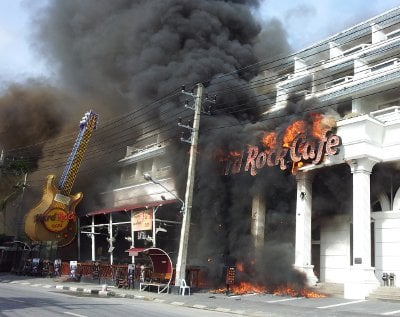 PHUKET: Following the breaking news of a fire at the Hard Rock Cafe in Patong this morning, the Phuket Gazette has learned that the operators of the global brand-name venue are hoping to reopen tonight.

The fire was contained to the large neon sign attached to the front of the building.

The iconic electric guitar sign and the stage area, also in front of the building, were not damaged, as initially reported.

Mr Saenee, of Destination Properties Thailand, which operates the hotel attached to the Hard Rock Cafe, told the Gazette that they had yet to confirm what exactly caused the fire.

“We have yet to talk with the police. As I mentioned earlier, we are hoping that they will allow us to open as soon as possible – maybe even tonight – as only the front of the building was damaged by the fire.

“There was no structural damage and the interior was entirely unaffected by the blaze. Guests can enter the cafe through the main entrance to the adjoining hotel,” he said.

Mr Saenee confirmed that the estimated 6 million baht in damage to the sign and the front of the building is covered by insurance.