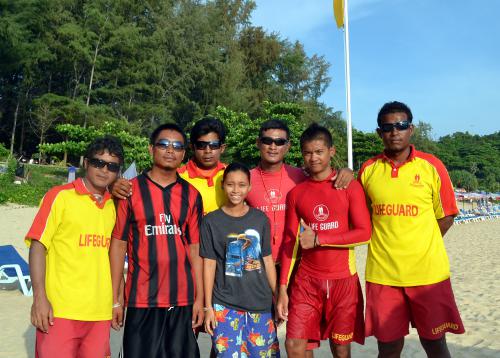 PHUKET: In response to the growing number of tourists drowning at Racha Yai Island, Governor Maitri Inthusut has called for a lifeguard station at the popular day-trip location.

“There are no lifeguards on the island now. Among the many things we need to do in Phuket to support tourism, having a lifeguard station there is an important one,” he told the Phuket Gazette in an exclusive interview on yesterday.

Earlier this month the head of the Racha Conservation Club, Sarit Jandee, presented the Governor with an urgent appeal to stop the drownings (story here).

According to Mr Sarit, at least eight tourists have drowned at the island in the past 10 months.

Gov Maitri is not relying solely on lifeguards to save tourists in the water, but resort staff as well.

“We are pushing hotel staff and anyone who works near the beach to learn how to rescue people from drowning,” he said.

“We’ve already put in place rescue training courses [story here], and some of the staff on Racha Yai have taken the training. We have another class scheduled for next month,” he said.

Lifeguards on Phuket beaches are managed by the Phuket Provincial Administration Organization (PPAO), and Gov Maitri said he had relayed his request to Paiboon Upatising, the organization’s president.

Nararit Touyon of the PPAO confirmed today that a study of Racha Yai beaches is planned.

“We’ll complete the study as soon as possible and present it to Mr Paiboon. Then it will be up to him to decide what to do,” he said.

“It’s always a good thing to have lifeguards around to rescue people,” he said.