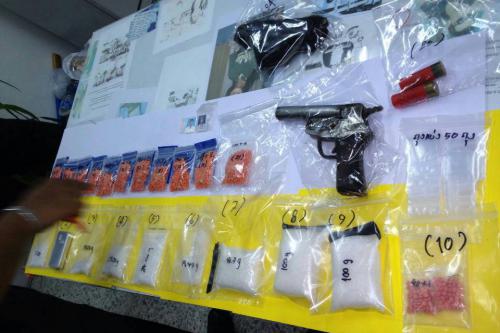 PHUKET: Police on Wednesday raided a house in a residential area in Thalang, where they seized 2,446 pills of ya bah (methamphetamine) and about 408g of ya ice (crystal methamphetamine).

Acting on a tip-off from plainclothes officers, Thalang Police Deputy Superintendent Pisit Chunpet served a warrant to search the house, in Baan Don, for drugs.

“We arrived at 3pm and saw several teenagers around the house, but they ran as soon as they saw us. We were unable to arrest any of them,” said Lt Col Pisit.

When Arpa Chotkamat, 20, who lives at the house, saw the officers, she tried to close the door on them, but they reacted quickly and served the warrant.

“We found 408.86g of ya ice, 2,446 pills of ya bah, a homemade gun, two shotgun shells and drug-taking paraphernalia,” Col Pisit explained.

“Her boyfriend, Veerakit “Nueng” Thaworn, was not in the house,” he added. Veerakit was wanted in connection with drugs being sold from the house.

“We took her to Thalang Police Station for further questioning. We are working on arresting her boyfriend and other fellow drug networkers,” Col Pisit added.