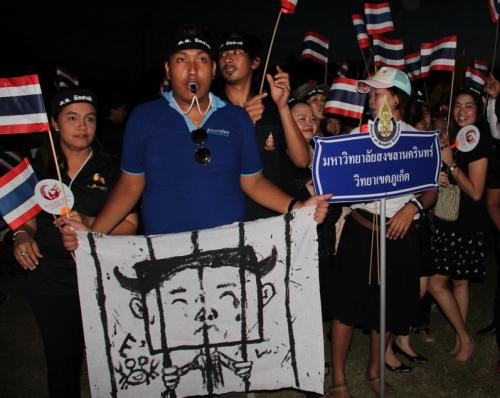 PHUKET: Hundreds of whistle-blowing students streamed through Phuket Town last night on their way to Phuket Provincial Hall to protest the amnesty bill.

Starting at about 6pm, students from Phuket Wittayalai School, Satree Phuket School, Phuket Technical College, Rajabhat University and the Prince of Songkla University Phuket Campus gathered in front of Provincial Hall to make their opposition to the controversial bill known.

“We are here to show that we do not want the bill. It’s not beneficial to the country, it’s just meant to help specific people,” one student told the Phuket Gazette.

“What we are doing is protecting the country from losing its legal principles and being ruined by bad people who won’t accept responsibility for the wrongs they have done,” she added.

“Whoever does wrong must be punished, not use their power to clean the mess,” she stated.

Their protest was not the only one in Phuket yesterday.

Earlier in the day, alumni from Chulalongkorn and Thammasat Universities had presented Phuket Governor Maitri Inthusut with a letter of opposition to the bill and about 100 staff at Phuket International Hospital had protested in front of their hospital. (story here).