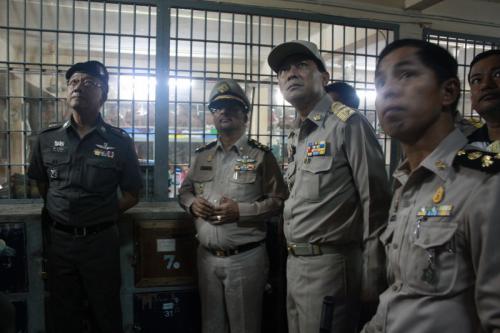 PHUKET: A pre-dawn search of Phuket Prison on April 30 led by the Phuket Governor failed to discover any drugs or contraband being hidden by prisoners, reconfirming the facility’s status as a Department of Corrections “White Prison”.

Each of the 1,898 male prisoners and 337 female prisoners were searched, as were their personal lockers, sleeping quarters, the infirmary and any other areas officers believed illegal items could be stashed.

A total of 200 inmates were randomly selected and tested for drug use. None tested positive.

Happy with the results of the search, Governor Maitri credited the prison officers’ thoroughness for the prison’s clean bill of health.

“The prison is clean because the prison officials are always checking up on the prisoners,” he told the press.

However, Governor Maitri expressed concern about the crowded conditions at Phuket’s only prison.

“The number of prisoners here is about three times the facility’s capacity,” he noted.

Prison Chief Rapin explained his officers were diligent in conducting searches and were specially vigilant in checking inmates returning from appearances in court.

“Several times we found prisoners trying to sneak in mobile phones and drugs, but they could not get them past our eyes,” he said.

Phuket Provincial Police Deputy Commander Arayapan Pukbuakao, who also joined the operation, told the Phuket Gazette, “According to police information, Phuket Prison is also clean of any contact with drug networks operating beyond the prison walls.

“The prison really deserves to be called a “White Prison,” he added.

The Department of Corrections has credited 70 of 143 prisons in Thailand, including Phuket Prison, with “White Prison” status, meaning the facilities are free from drugs, mobile phones and other items banned from inmates.