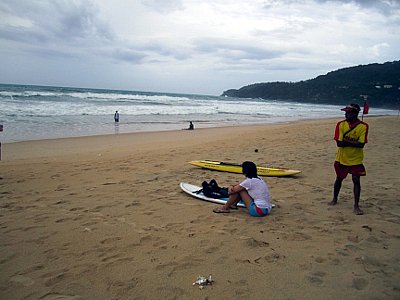 PHUKET: Phuket Governor Tri Augkaradacha has issued a formal warning to all head coaches of teams competing in the Phuket Youth Games to not let their athletes swim in the dangerous surf.

“The warning was issued to the head of each team to make sure their athletes do not go into the water during the current treacherous windy conditions or swim in dangerous areas marked by red flags,” Gov Tri said.

“Phuket is experiencing its ‘monsoon season’, which is windy and dangerous to anyone going into the sea. Athletes who have finished competing in their sports should not go into the water at all,” he added.

The warning comes after lifeguards rescued one of the Youth Games athletes from a dangerous rip current at Karon Beach at about 3pm yesterday.

“There were many people in the group, including athletes and supervisors,” said Uten Singsom, head lifeguard at Kata-Karon.

However, many of the group went swimming while wearing heavy clothing for warmth.

“Supervisors, please warn your athletes to not go into water while wearing heavy clothing or jeans. It will get them into danger,” Mr Uten added.

Paiboon Upatising, President of the Phuket Provincial Administration Organization (OrBorJor), said that the Phuket Lifeguard Club had contacted hotels along the west coast so they would warn their guests of the current dangers of swimming at Phuket’s beaches.

“Last year, Phuket lifeguards rescued 1,500 people, but that didn’t stop 15 people from drowning. Most of them were foreigners.

“The top critical factors in those drownings were drinking of alcohol before swimming and ignoring warnings from the lifeguards to not go swimming,” Mr Paiboon said.

Mr Paiboon also revealed that two Youth Games athletes have been hospitalized after contracting dengue fever on the island.

“Both Miss Kornkaew Saengmanee from Surat Thani province and Mr Pradon Korkitipaiboon from Phuket are on IV [intravenous] drips. They should be discharged from hospital within one or two days,” he added.