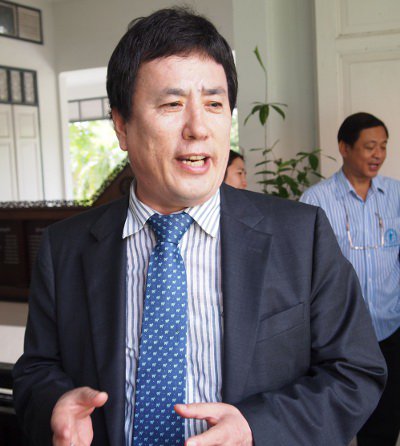 PHUKET: Assuring the public that a light-rail project for the island will go ahead, Phuket Governor Tri Augkardacha said he expects the engineering firm to build the project to be named by the government by August.

“We have an official committee to oversee the light-rail project in Phuket. The committee comprises local officials and businessmen, as well as representatives from the Ministry of Transport in Bangkok. We are now considering three companies that we will present to the Ministry. I believe we will be notified which company will be selected by the end of August,” he said.

Gov Tri announced the news on Wednesday when Sung-Min Lee of Korean public transport developer Dohwa paid a visit to Provincial Hall to discuss the project – for the third time.

“I heard that the Thai Cabinet has already acknowledged and agreed with the project. That is why we have come back again,” said Mr Lee, president of Dohwa’s Railway Metro Division.

“We want to invest in the light-rail train project and other public transport systems in Phuket because we see very high potential in this province. A large volume of tourists visit here every year. Moreover, we have the budget to invest and we have the technology to complete the project,” he added.

Engineers and analysts from Dohwa will collect more data to add to their projections, returning in about two months with their final draft plan for the project.

In August last year, Dohwa filed one of the most comprehensive plans presented for the project, including maps of where the light-rail system would transit and the likely location of stations.

“I will further complete the study that has already been conducted to make sure it is up to date in terms of structure, budget and investment conditions,” said Mr Lee.